A Good Time To Invest?

With some things in life, a good start is everything. Take the 100-meter sprint, the whole race is over in 10 seconds or less. The importance of getting out of the blocks quickly to ensure success can’t be understated. In the 100-metre sprint’s extended athletic cousin, the marathon, a bad start, while annoying, must be put in perspective. There are two plus hours ahead, unless a competitor’s feet have been glued to the pavement, there is ample time for them to regroup and overcome.

When investing, the thought of bad start can be a psychological hurdle. A common question an investor will ask their adviser will be a variant of “is this a good time to invest?” Concerns come with that initial investment commitment. In contrast to dollar cost averaging, where the entry is incremental and ongoing, a large sum in one hit can provoke more hesitation and second guessing. It’s a bigger unknown. It’s not that the investor doesn’t want to invest, but it’s the fear of making a mistake – is it the right time?

This occurs because we understand investment markets are volatile. They react to news and can quickly move in one direction or the other. This can make us feel either foolish, for not waiting, or smugly satisfied for buying when we did. Overall, it’s those feelings of foolishness and believing that we should have timed a better entry that we’re most trying to avoid.

Since 1980 the ASX has finished 36% of months in negative territory. So historically, the odds have been in an investor’s favour, but no one wants to start their investment journey in those 36% of red months, but does it really matter?

Whether a decline month happens in the first month or the tenth month, there’s no avoiding your portfolio going down at some stage – unless it’s exceptionally conservative. The concern with the first month is the psychology of immediately giving up some of your capital.

To illustrate the futility of focusing on a poor start, we’ve looked at the worst month to invest during each year in the 1990’s on the ASX.

Using $1000, we’ve tracked market performance for a full decade. With a 10-year time hold, it’s long enough to put a frustrating beginning back into perspective. There are no additional contributions, it’s just tracking that initial $1000 for the next 120 months or ten years.

Examples of market returns are often done on a calendar basis, but rarely does an investor enter the market on the first day of a particular year. They are more likely to commit to a strategy sometime throughout the year. While this experiment doesn’t take into account individual days, it would be indicative of an investment experience. 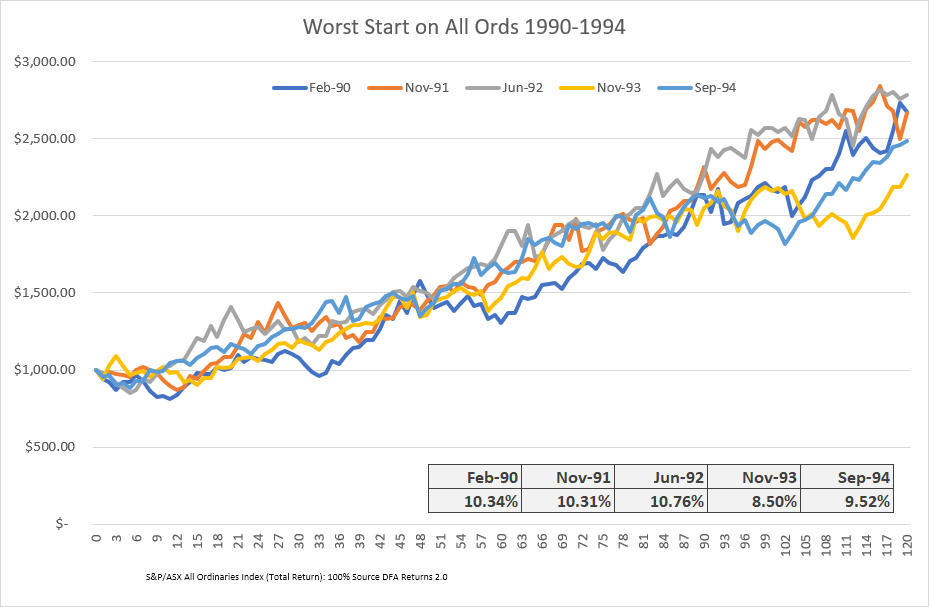 As shown by the chart there were varying outcomes in each of the five years.

The best result of the bad bunch began in June 1992. $1000 invested would be in the red for the first 11 months, but across the full ten years, patience was rewarded. If an investor set aside their bad start, an average annual return of 10.76% was their reward.

The worst result of the bad bunch began in November 1993. $1000 invested recovered quickly from its initial bad start, before encountering an ongoing rough patch that kept it mostly in negative territory until the 18-month mark. End result? An average annual return of 8.5%.

A good return, but 2.26% lower than the leader. Yet there’s no argument that the start made a difference. At varying points, it was neck and neck with the others, that time frame just had a poor finish in this experiment.

While not part of this experiment, if both starting points extended to 25-year periods the difference between the two narrows to 0.76%. You never want to leave three quarters of a percent on the table, but it highlights with time, things begin to even up.

The returns in the second half of the 1990’s had an even wider variance over their ten-year periods, but again, their outcomes had very little to do with any poor beginning.

The worst time to start in 1995 was January, which wasn’t that bad. One negative month before delivering a 20.73% return for the calendar year. Across the ten years, the return for the ASX was 12.07%.

Yet it didn’t compare with October 1997 as a start month. In contrast to the charmed first 12 months of January 1995, an investment beginning in October 1997 was still under water 12 months later. However, the poor start meant nothing to its return over the decade, delivering an annualised return of 13.46%.

The worst start month in the whole experiment was May 1999. The tail end of the ten-year period took in the full financial crisis along with the beginning of the recovery. This severely impacts the annualised return. Respectable at 6.29%, but anemic in comparison to the other returns.

It is worth noting, after four years the May 1999 start was the worst of the five scenarios, yet after eight years it was the strongest performer. Sharemarkets have a way of rearranging perspectives like that. 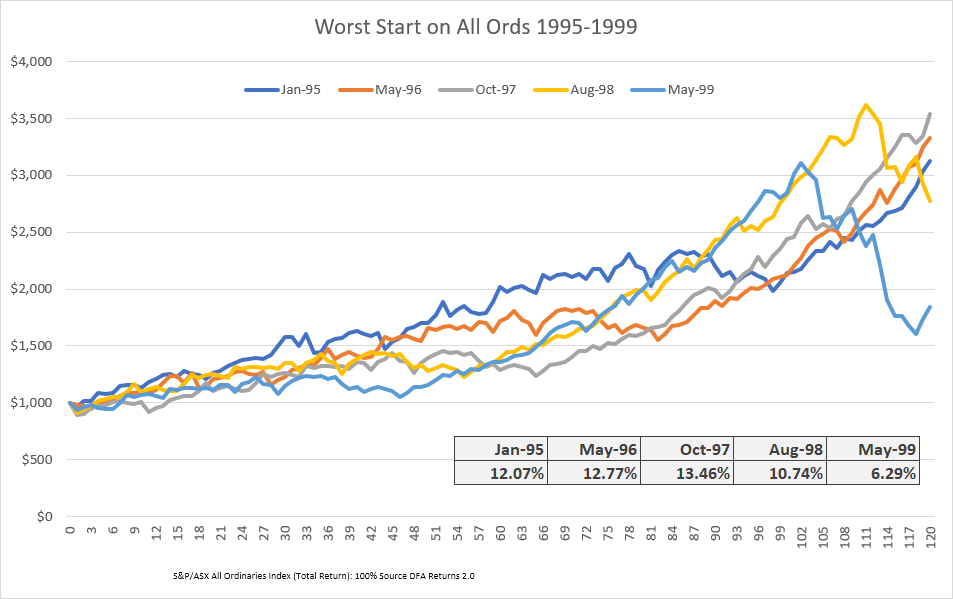 Many of these returns are quite strong, which sets aside any argument a poor start will define an investment journey. There’s no curse or damnation involved if someone invests and the market moves down on them. It happens. Sometimes the rewards aren’t initially forthcoming. They may prove elusive for some time, but there are never mistakes with timing. There is no possible way of getting an entry absolutely right, unless it involves sheer luck.

The other thing to remember, one person’s investment experience isn’t going to be someone else’s investment experience, unless they’re beginning on the same day. The challenges they encounter will be unique to them because of their time spent in the market and how their capital has grown or not grown to that point in time.

Agonising over the right time to invest becomes thought and energy down the drain on something that can’t be forecast. Even the best of starts will encounter turbulent markets at some point and the worst of starts can go onto flourish. Investors are better off just starting. There is no right or wrong entry point.

This is a marathon, not a sprint.