‘Tis The Season To Be Wrong

The year’s winding down, so in the financial world that can only mean one thing – forecasts for next year.

Every mainstream media outlet will be putting them together over the next month because A. people like lists; and B. they’re easy to string together. The thing to always keep in mind: they’re all worthless. There’s no value that could be gleaned from forecasters who don’t own working time machines or crystal balls.

The fun part comes from looking back because picks and forecasts are mostly made with impunity. There are so many of them that rarely does anyone ever gets held to account. So a few of the clangers should always be highlighted to remind investors not to pay them any attention.

This time last year the Australian Financial Review published a 5000+ word opus: “The Best Choices for 2017: Equities”. Surprisingly, despite suggesting it was important to pick carefully in the year ahead, for the most part the article didn’t offer up many picks.

It did allow analysts and managers to muse on the general prospects for various sectors in the year ahead: retail, infrastructure, energy, technology, healthcare, agriculture, mining, property and banks. It named companies expected to do well, but mostly stopped short of offering outright recommendations.

However, in retail, while consensus was the sector would be subdued the suggestion was there would be some winners and losers. Leading to some necks being stuck out with explicit buy and sell calls made by Citigroup and UBS. With those names collected it’s time to see how well they’ve performed in 2017.

How’d they fare? As the chart shows, had you done the opposite of all their recommendations you would have enjoyed a much better return than actually doing as they said. The four companies they recommended as buys went into the red by a minimum of 16%, while the two sells gave positive returns. 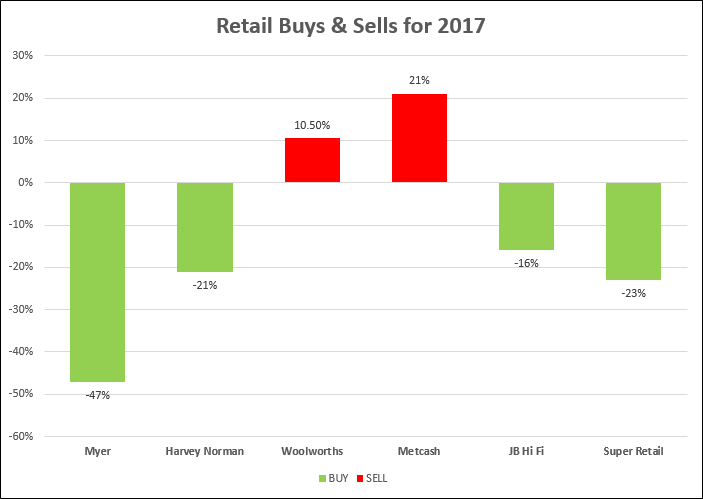 From the buys, Citigroup was most positive on Myer, noting “we expect to see better operating margins and positive sales trends even with the sluggish [consumer spending] backdrop.” Yet it was the worst of the bunch, having fallen 47% year to date.

While the sell on Woolworths from UBS was reliant on the idea that price competition from food retailers may turn into a full-blown price war. In other words, a forecast on a possibility. Not exactly the most robust way to invest.

Many of the forecasting articles follow a similar formula. It’s always based on a perverted understanding of diversification. Where the investor needs to have a grab bag of shares from various industries. List each sector of the economy and pick the companies ‘most likely to succeed’ and because you’ve got a bit of everything, you’re diversifying, right?

True diversification spans asset classes and countries. It’s not reliant on whether Woolworths gets into a price war with Coles and Aldi, meaning your retail exposure should be elsewhere for that year. It allows you to remove your focus away from your portfolio and onto your life.

For the media though, they need your eyes, while the analysts and brokers need you churning for commission. So what you won’t find in the best choices for 2018 is the recommendation of a portfolio tailored to your needs with a minimum 10 year horizon.