Major economies took varying paths in the first quarter of 2015. While the US Federal Reserve prepared to raise interest rates, central banks elsewhere continued to add further stimulus as they looked for economic growth.

The US Federal Reserve responded to an improving US economy by signalling it would raise interest rates from record lows later this year, although it continued to emphasise it would be a gradual adjustment.

In contrast, amid continued stagnation in the Euro Zone, the European Central Bank committed to another program of quantitative easing. And with the World Bank and IMF lowering growth expectations, more than 20 countries lowered their interest rates during the quarter.

China was one of those countries, cutting its rates for the second time in five months amid slowing industrial output and a declining property market. Chinese policymakers warned growth would slow to a 25 year low of 7%. 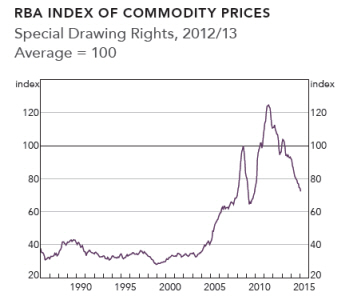 Also pushing central banks to act was a global trend of falling inflation as commodity prices continued moving sharply lower. Oil was down 10% during the quarter, bringing its losses to nearly 60% since mid-2014. Meanwhile iron ore continued to fall, dropping 28% to a 10 year low.

Stimulus, interest rates and commodity prices helped drive a change in currency markets. The US dollar staged broad gains – particularly against the euro and commodity related currencies such as the Brazilian real, Norwegian kone, Canadian dollar and Australian dollar.

In Australia, the Reserve Bank cut interest rates by .25% to a record low of 2.25%, the first move since August 2013. The bank cited below-trend growth, rising unemployment and falling prices for iron ore and other commodities as reasons for the move.

The following outlines the returns across the various asset classes to the 31st  March 2015.

The mixed global economic picture failed to dampen sentiment in equity markets for the March quarter. Here are the highlights:

Currency movements had a significant influence for equities as the European Central Bank embarked on quantities easing. The euro fell almost 11% against the US dollar over the quarter while the Australian dollar continued the slide that began in September last year, extending its fall to 76 US cents as the US dollar strengthened, commodity prices weakened and the Australia/US interest rate differential narrowed.

This meant global equity strategies performed strongly during the quarter. The falling Australian dollar helped unhedged funds by around 4.5%.

The trend of small companies lagging large continued in Australia, but this trend was reversed in other developed and emerging markets.

When Marketing and Reality Collide

Ethel Sprouse was someone in a tough situation. From the US, she’s an elderly lady who has a husband with Alzheimer’s and cares for an adult daughter who is mentally disabled.

She’s the type of person who needed unbiased financial advice and unfortunately she didn’t get it.

In 2007 Mrs Sprouse transferred her life savings to a well-known and large US financial company, Allstate. That money was invested in a non-diversified portfolio of shares and subsequently Mrs Sprouse lost $400,000.

The attraction to Allstate was no doubt its size, giving Allstate the feeling of being a secure firm. However, there was something else that attracted Mrs Sprouse, Allstate’s slogan – “You’re In Good Hands”. In America that slogan is iconic and Allstate have even trademarked the term “good hands”. Mrs Sprouse believed Allstate were the type of company who’d definitely place her interests first. After all, that was the message portrayed in their advertising.

The Public Investors Arbitration Bar Association (PIABA) has taken up Mrs Sprouse’s case. This has meant that Allstate has been forced to defend their position and it’s shown a significant disparity between Allstate’s marketing and what it believes its legal obligations to be. Legal documents tendered by Allstate show they believe they have zero responsibility to their clients.

Allstate denies any investments it recommended to Mrs Sprouse were unsuitable and also disputes the size of the losses she suffered, but the really important part was it disputed it had any fiduciary obligation that depended on unbiased advice.

As Mrs Sprouse says “I was surprised and disappointed to learn that Allstate denies that it had a duty to put my interests first.  Why would anyone invest their life savings with a firm that would not put their client’s interests first? The simple answer is that nobody would invest with them, which is why Wall Street’s marketing is designed to evoke the trust.”

In similar cases brought by PIABA on behalf of investors against large financial institutions in the US those institutions denied they had any responsibility towards their clients.

Here’s the marketing language used by some of those firms who denied they owe clients their best interests.

UBS: “Until my client knows she comes first. Until her ambitions feel like my ambitions.  Until then.  We will not rest.  UBS.”

Ameriprise Financial: “Once you’ve identified your dreams and goals, and you and the advisor have decided to work together, you can count on sound recommendations that address your goals. Our advisors are ethically obligated to act with your best interests at heart.”

Wells Fargo: “A healthy relationship with your Financial Advisor should make you feel that your best interests are the top priority.”

Keep this in mind next time you see a warm and fuzzy commercial from a bank or large financial firm, because it’s little different in Australia.

Coincidently, back in Australia a Senate committee was sitting this week on financial misconduct. Like in the US, some clients of Australia’s major financial institutions have painfully found out those institutions don’t have their best interests at heart.

The majority of the big banks were in attendance at the Senate committee and they were grilled over their standards and the numbers of financial planners they’ve had to terminate or “move on” in recent years.

Many suggestions were offered by the banks on how to improve the industry. Sadly, like in the US they missed or simply chose to ignore the most obvious – place their clients’ financial interests above their own.

Very simple, yet it seems they believe this is just the cost of doing business.