August 2, 2016
Economic OverviewGlobal equity and bond markets offered generally solid returns despite the late quarter uncertainty generated by the United Kingdom’s referendum result in favour of leaving the European Union.The economic news was mixed in the quarter. In the US, the Federal Reserve left its official interest rates unchanged in June, saying before it increased interest rates again it needed to see clear signs of economic strength before. US GDP grew at an annual rate of 1.1% in the first quarter.

China in April reported annual GDP growth of 6.7% for the first quarter, representing a continuing slowdown from growth rates of recent years, though retail sales and investment growth came in ahead of market expectations.

In late April, the Euro Zone reported that the economy in that region grew at its fastest pace in five years in the first quarter, helped by falling unemployment and lower energy costs.

Bond markets rallied strongly through the quarter to take long-term yields to record lows in many markets by the end of the period.

The following outlines the returns across the various asset classes to the 30st June 2016.

In sectoral terms, healthcare, energy and materials sectors were among the best performers, the latter two helped by rising commodity prices. Brent crude rose more than 25%, bringing its gains since January’s 12-year lows to 85%. Spot gold prices rose 8%, while iron ore built on the strong gains of the first quarter.

Consumer staples and financials were among the lagging sectors in both the Australian and other developed markets.

In country terms, the top performing developed equity markets included New Zealand, Canada, Norway and the US. Brazil, the Philippines and Indonesia led emerging markets. The list of laggards was dominated by European markets.

Fixed interest markets were boosted by the Brexit uncertainty. Long-term yields declined sharply, while there was a slightly positive credit premium for the quarter. 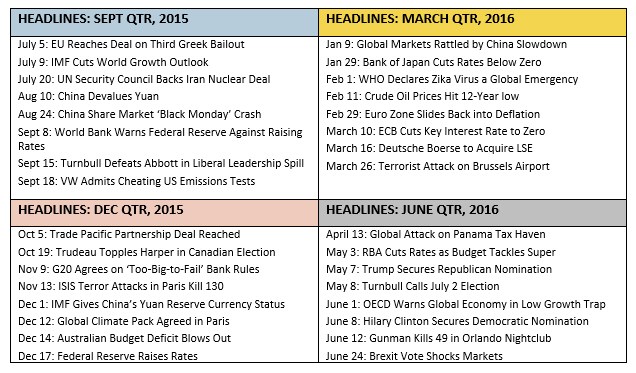 With local equity returns offering investors uninspiring returns over the last financial year it was inevitable that the media would tee off about the lack of growth in “super”. Scribbler for The Age and Sydney Morning Herald, Elizabeth Knight was one who took aim. In doing so she did herself, nor her readers, any favours, specifically saying “good active managers will more regularly outperform index players” among other things we’ve quoted below.

The most telling of the performance data is how super funds have invested on a sector basis. In total 41.6 per cent of the average manager’s allocation was invested in financials – which means the big four Australian banks – in the nine months to March this year. The financial sector’s return over the year to June 2016 was negative 3.5 per cent. The next biggest sector allocation was materials (11.7 per cent) – this is basically BHP Billiton and Rio Tinto and this category’s value fell 2.8 per cent over the year.

On the flip side 2016 saw utilities stocks rise an impressive 24.4 per cent. But the average allocation of funds to this sector was a miserly 2.2 per cent to March 2016.

In other words super managers are still putting well over half of the billions of dollars they invest into the very big Australian corporates – regardless of the fact that the shares have been declining.

Why would they employ such a counter-intuitive investment manner? Because a large portion of funds management are index players – by that I mean they invest in line with any company’s weighting in the index. And because companies like the banks, the big miners and Telstra make up a large part of the stock exchange index most of the super money will be invested in these stocks.

This strategy works sometimes – particularly when markets are stable. But over the past year markets have been particularly volatile and active funds managers have performed far better.

Last year the Australian index huggers were significantly trumped by funds that invested offshore – because of better returns from international sharemarkets and a very strong currency tailwind.

Knight might want to get to the bottom of how investors can get better returns, but her approach feeds into the same short term frustrations that lead investors to make knee jerk decisions and chase returns based on a previous year’s success.

Firstly, complaints about 1 year returns because of allocations to an index are ridiculous and only result in that short term thinking. How long is the average superannution investor’s timeframe? No one knows ahead of time which sector or asset class will be the best performer – if they did why would they waste their time working for a fund manager?

And what Knight failed to tell her readers was over the 5-year period to December 2015 67.18% of the active fund managers she talked up failed to outperform their benchmark (ASX 200). Which means unless you know ahead of time who those best performing active managers will be, you’re better off taking the lower cost index option referenced.

Secondly, the point about Australian index huggers being trumped by funds investing offshore is an apples and oranges comparison between two different asset classes. Any investor with a growth tilted portfolio properly allocated to their risk profile will have both local and international exposure. Knight unfortunately gives the impression investors should be chopping and changing, which has historically proven to provide lower returns.

This isn’t to defend the defend the local superannuation industry because their default offerings will never be a substitute for a portfolio geared towards an investor’s specifics. However, the focus on poor returns in one asset class in one year (poor years happen), a futile comparison between asset classes when they both form part of a balanced portfolio, and the insistence an investor will find better returns with an active manager, when troves of data suggest otherwise, do investors no favours.

With thanks to DFA Australia.
This material is provided for information only. No account has been taken of the objectives, financial situation or needs of any particular person or entity. Accordingly, to the extent that this material may constitute general financial product advice, investors should, before acting on the advice, consider the appropriateness of the advice, having regard to the investor’s objectives, financial situation and needs. This is not an offer or recommendation to buy or sell securities or other financial products, nor a solicitation for deposits or other business, whether directly or indirectly.