Political uncertainty remained a feature in the June quarter as President Trump dismissed FBI director James Comey and French and UK elections were held. In the EU, risk eventually retreated as the Centrist and Pro-EU candidate Emmanuel Macron won a convincing victory in the French elections.

In the UK things weren’t quite as clear, with the snap election anticipated to strengthen the Conservative majority before Brexit negotiations, ended by eroding their majority. While commentary from Bank of England Governor Mark Carney and his EU peer Mario Draghi appeared to signal the days of stimulus were numbered and tighter monetary policy was ahead.

In the US, the Federal Reserve looked through disappointing inflation figures to increase interest rates by 0.25%, while also detailing plans to reduce its balance sheet. Despite the rate move, the US dollar struggled due to the lack of movement within the Trump administration and other major developed economies signalling tighter monetary policy.

The Bank of Japan offered the most upbeat assessment of the Japanese economy in years which was backed by strong corporate results, however the spectre of North Korea appeared to constrain any euphoria. In the rest of Asia, Chinese data improved during the quarter with Hong Kong following suit, while a new President in South Korea signalled a potentially reinvigorated economy and corporate governance reforms. 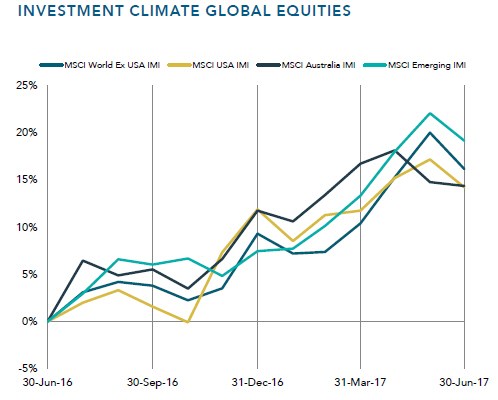 Commodities were a drag during the quarter as Brent crude fell 9.3% and iron ore stockpiles built in China. OPEC extended production cuts, but the market was hoping for those cuts to be increased and when this didn’t eventuate the weakness in oil persisted. Meanwhile US oil production continued to rise further tempering oil strength as the US moved into summer driving season.

Back in Australia, the biggest news of the quarter was a $6.2 billion levy on the big four banks and Macquarie Group.

Asset Class Returns
The following outlines the returns across the various asset classes to the 30th June 2017.

Australia was alone among developed markets in posting a negative return for the quarter at -1.54%. The Australian market was weighed down by weakness in banking due to the government’s announced bank levy, though telcos, energy, consumer staples and real estate investment trusts also played their part.

In Asia, China pushed higher on investor optimism following a solid earnings season in blue chip stocks and the landmark decision by index provider MSCI to include Chinese A-Shares in its range of benchmark indices.

Finally, the old whipping boy Greece was the strongest market index as the country reached agreement with Eurozone creditors for the release of an 8.5 billion loan tranche.

Why Starting an SMSF To Buy Property is a Great Idea

Starting a Self-Managed Super Fund is quite an exciting prospect. No longer will an investor be constrained by the shackles of their tired superfund, an SMSF is an open road with untold freedoms ahead, but how to get started on that road? Luckily there are many eager experts out there ready to liberate investors from the boring returns of their banal old super funds and guide them into the riches of buying property within their SMSF.

Let’s say you and your partner are both in your early fifties, have maybe spent 30 years working and have managed to (between both of you) accrue $250,000 in super.

You may be with an industry super fund, maybe retail, maybe you have a financial planner, but for argument’s sake, let’s say the super fund costs are around 1% per annum or less. Let’s say it’s $2,000 to keep the maths easy. You also have an accountant who charges you $200 to do your taxes each year. Your “net worth” so to speak, to the finance industry is $2,200.

But $2,200 doesn’t feed many hungry mouths. It certainly doesn’t contribute significantly to support an assortment of professionals who can help with your SMSF and find you the perfect property. Nor does it contribute to the black hole of state government coffers or pay thousands in interest to keep bank CEOs happy.

To help all these people out, instead of paying your fees annually you could front load most of them and pay them up front so everyone can benefit now rather than having to wait for you to pay fees each year.

This is why it’s a great idea to set up an SMSF and buy a property.

With gross rental yields around 4%, you get income of $28,000 per year. Then you pay strata, insurance, rates, letting fees etc which means you are probably losing a few thousand each year.

So let’s go through the maths:

Sure, you will wipe out close to 25% of your entire savings in upfront fees alone. And your annual fees are at least double what they were, maybe triple. But just look at the list of people who will benefit from your new SMSF: accountants, lawyers, governments, real estate agents and banks.

That’s a lot of marketing and lobbying power – to convince you to put your super into property via an SMSF, and to lobby the government to keep the changes that allow you to borrow in your SMSF despite ongoing warnings and objections from independent observers.

Well maybe not for you, but for everyone else in the game it makes perfect sense!
Credit: macrobusiness.com.au