Despite continued political uncertainty amid rising tensions with North Korea’s ‘rocket man’ and the ongoing failure of the Trump administration to realise its policy goals, sentiment for the September quarter was largely undimmed.

In the US, both economic data and forward-looking activity indicators did slightly deteriorate towards the period end in the wake of hurricanes Harvey and Irma. However, the market and the US Federal Reserve judged any potential impact on growth as transitory and easily overcome. The Federal Open Market Committee confirmed measures to reduce its balance sheet in October, while Federal Reserve chair Janet Yellen added to expectations for higher interest rates.

The Eurozone’s economic sentiment indicator rose to 111.9, its highest level since July 2007. Unemployment in the eurozone remained at 9.1% in August -stable compared to July and the lowest rate since February 2009. Meanwhile, the European Central Bank flagged it could reduce its stimulus measures and the prospect of tighter monetary policy pushed up the euro for much of the period.

In the UK, the sterling strengthened against a weak dollar, and noticeably so in September after the Bank of England indicated it would normalise interest rates relatively soon. 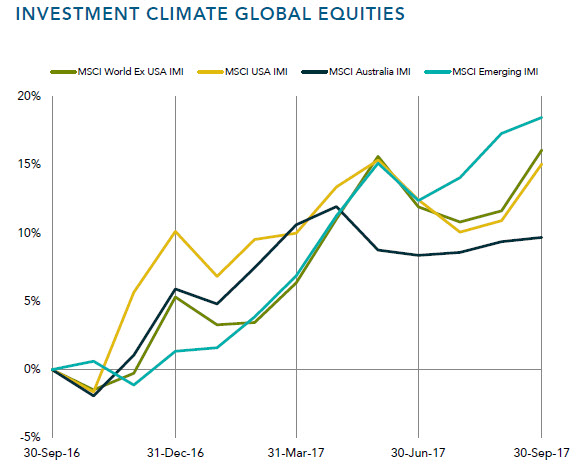 Economic data continued to improve in Japan, with data released in September for industrial production better than forecast while there was also a jump in inflation. However, the principal risks came from outside Japan with sentiment capped due to the prospect of US growth-oriented policy and the escalation of tension over North Korea.

The sentiment in China was more upbeat with GDP 6.9% year-on-year, maintaining the same pace of growth from the previous quarter. A stronger yuan also helped ease any fears over capital outflows as the currency advanced +1.9% against the US dollar over the quarter.

Despite the shifting rhetoric in other developed markets, the Reserve Bank of Australia remained neutral during the quarter with little prospect of interest rate moves in the near term. However, their assessment of the economy has improved thanks to the gains in the labour market and progress in non-mining investment.

Asset Class Returns
The following outlines the returns across the various asset classes to the 30th September 2017.

U.S. equity markets continued their remarkably smooth journey and the last quarter was no different with the S&P 500 recording a total return of 4.5%. In the relentless climb higher, the biggest stumble so far has equated to a pullback of less than 3%.

Australian returns for the quarter were more modest by comparison at 1%, with strength in materials and energy stocks offset by weakness in the telecommunications sector, Telstra in particular.

In country terms, the top quarterly performers among developed markets were in Europe and Scandinavia, led by Norway, Italy and Portugal. The top emerging market countries included heavyweights Brazil, Russia and China.

On currency markets, the US dollar was mixed over the quarter, gaining against the NZ dollar and South African rand but down against the Euro, as well as against the Australian and Canadian dollars.

Fielding questions about investments is part of our job. Quite often they’re predictable – if an investment or asset class is in the news because it’s been going up we’re likely to be asked about it. Frankly, we’d like to hear those questions because it can potentially save some heartache down the road.

We have seen and heard of situations where an investor decided not to ask their adviser about an investment because they expected to be told it was a bad idea. They’d already made their mind up and didn’t want to be dissuaded. On every occasion considerable sums of money were lost because it was based on a feeling, media heat or… a celebrity endorsement.

Most recently we’ve been questioned about bitcoin because Richard Branson talked of investing in it – it must be a good idea if someone famous is investing in it – right? While we’ve already covered bitcoin it’s an opportune time to speak about celebrity endorsements in the financial realm.

Believe it or not, celebrities are people just like us – even the successful ones. This was laid bare back when well-known US businesswomen and media personality Martha Stewart was charged with insider trading over a decade ago. Ms Stewart was no slouch as a businesswomen – her stake in her own company was worth over a billion at one stage and her personal wealth is still estimated at over half a billion today.

Yet she didn’t get there by trading stocks. 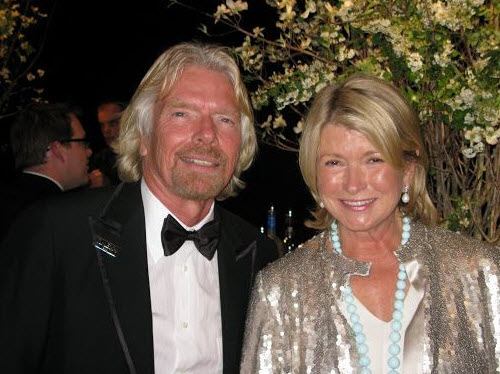 During Ms Stewart’s trial, her portfolio was published as part of evidence. It showed she had common behavioural biases. Particularly loss aversion – just like the average investor Ms Stewart would hold onto stocks long after they’d gone down. Only selling in December when prompted by the end of the US tax year – mental accounting influenced by actual accounting!

Was she a successful investor? On the evidence available – no.

Her share portfolio was worth $4.5 million in June 2000 and by December 2001 it was sitting at $2.5 million. It should be noted this was a red period in the market, but even with that in mind Ms Stewart underperformed the S&P 500 by a wide margin. In fact, of all the shares Ms Stewart sold in December tax season in 2001 the only one she booked a profit on was ImClone – the company she was charged with insider trading over! Given her high status position she also had the privilege of guaranteed access to many IPOs. Several of these afforded Ms Stewart huge gains upwards of 300% on opening day, yet all were eventually sold at a loss.

Famous people are interesting to some people and that’s why the media keeps us up to date with their activities. The problem is it when it comes to their investment choices these media reports give us a disproportionate view of the risk involved. First, most people automatically assume a good businessperson must be a good investor and if they’re discussing investing then it must be worth listening. They then also forget to factor in a million-dollar loss for a person like Martha Stewart or Richard Branson might be equivalent to $100 for the rest of us.

While it was after the quarter ended, it’s worth making mention of the 30th anniversary of the 1987 market crash.  Unlike the media who’ve been endlessly quoting people remembering that day, we thought we’d provide something of value – a reminder of the folly of running to the ‘safety’ of cash in the wake of a downturn.  Using the example of Australian shares vs cash and starting with $50,000 in September 1987, had you sold out after the crash and parked your loot in cash you’d have $191,136 by September 2017.

In contrast had you remained invested your money would have grown to $453,307. 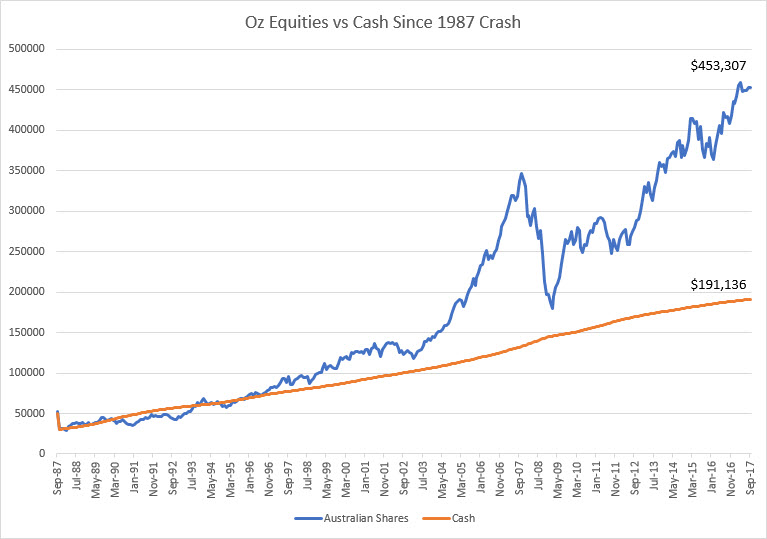 This material is provided for information only. No account has been taken of the objectives, financial situation or needs of any particular person or entity. Accordingly, to the extent that this material may constitute general financial product advice, investors should, before acting on the advice, consider the appropriateness of the advice, having regard to the investor’s objectives, financial situation and needs. This is not an offer or recommendation to buy or sell securities or other financial products, nor a solicitation for deposits or other business, whether directly or indirectly