Once again, the investment strategy of maintaining discipline and holding for the long term won out over reacting to media forecasts and predictions from hyperventilating partisans. In January 2017 CNBC suggested Wall Street was the most bearish they’d been in 12 years, as it turned out, the global economy continued to strengthen as share markets posted solid returns on low volatility.

In Q4, defeats in US Senate contests struck fear into Republicans about 2018 mid-term elections and they quickly agreed to the long talked about Trump tax reform bill. Markets rallied with big tax cuts ahead for corporations. US employment data remained strong, but was distorted by the effects of hurricane season.

As was widely anticipated, the US Federal Reserve lifted interest rates by 25 basis points in December. The Fed also raised its growth forecasts for 2018 to 2.5% from 2.1%. 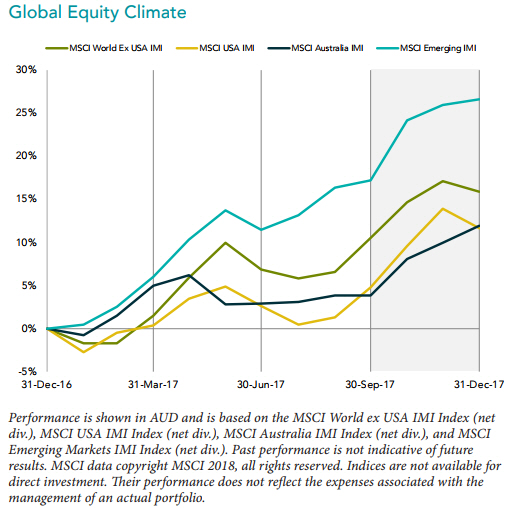 In the Eurozone, data showed the economy continuing to recover. The unemployment rate fell to 8.8% in October, the lowest rate since January 2009. In October, the European Central Bank announced that quantitative easing would be extended to September 2018 but that the pace of purchases would be reduced from €60 billion per month currently to €30 billion.

Despite a sluggish economy, the Bank of England’s (BoE) monetary policy committee raised interest rates for the first time since November 2007, from a record low of 0.25% back to 0.50%. Annual consumer price index inflation reached 3.1% in November, breaching the BoE’s upper target.

The Bank of Japan’s quarterly Tankan survey recorded the strongest sentiment among large manufacturing companies for more than 11 years. Despite slightly disappointing economic numbers seen in November, virtually all the data released in December exceeded expectations. The Japanese unemployment rate declined to 2.7%, a new low for this cycle, while the number of people employed extended the rising trend seen throughout 2017.

In December, the Reserve Bank of Australia (RBA) said the local economy was growing around its trend rate of 3%, with employment and investment strengthening. Activity was being supported by low interest rates and public investment in infrastructure. The RBA said one continuing source of uncertainty, however, was the outlook for household spending, with income growth slow and household debt levels remaining high.

The Bloomberg Commodities index pushed ahead +4.7% in Q4, underpinned by a rally in industrial metals and energy. Nickel (+22%) and copper (+12%) and iron ore (+12%) posted the strongest gains as Chinese demand remained firm. In the energy sector, Brent crude surged +18.2%, driven by an agreement among OPEC, and non-member countries such as Russia, to extend production cuts throughout 2018.

The following outlines the returns across the various asset classes to the 31st December 2017.

Emerging markets led to gains in global equity markets, their best year since coming out of the global financial crisis. The MSCI Emerging Markets index returned more than 27% over the year, its best performance since 2009. China was one of the top performers, jumping almost 40%.

Developed markets also delivered 20%+ returns for the year. Among the developed markets, using the MSCI World Index (IMI) as a proxy, the overall gain for the year was a bit over 13% in AUD terms. All 23 members posted positive returns, ranging from more than 40% in Austria to just under 3% in Israel.

In the US, the benchmark S&P-500’s near 22% return in local currency terms was its best calendar year since 2013 and placed 2017 in the top third of best performing calendar years in the index’s history. In New Zealand, the NZ50 index registered a sixth consecutive year of gains, hitting record highs.

Australia’s benchmark ASX300 gained over 12% in 2017 on a total return basis. Its sixth consecutive year of gains and bringing it to its highest levels in nearly a decade. The best performing sectors for the year were health care, information technology and energy. Telecommunications services was the only sector with negative returns, although this was heavily impacted by the poor performance of Telstra.

Despite the improvement in the global economy, wage growth and core inflation remained very low in many countries.

THE YEAR IN NEWS

The chart below highlights some of the year’s major news events in context of broad MSCI World Index market performance. These headlines are not offered to explain market returns but to show that investors should view daily events from a longer-term perspective and avoid making investment decisions based solely on the news. 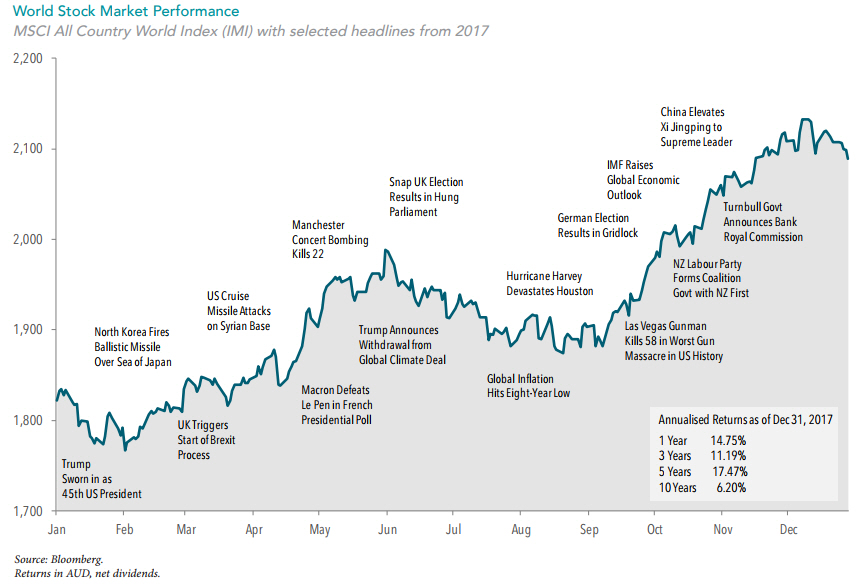 The takeout from 2017, and something that remains consistent every year, is that it makes more sense to employ an investment approach based on diversification and discipline than one based on making predictions and timing markets. The first approach requires only your patience, the second approach requires that you not only accurately forecast future events, but also anticipate how markets will react to those events.

2017 was the year that truly highlighted the importance of ignoring the media when it comes to your finances. The reaction to Donald Trump being elected President prompted all manner of hysterical forecasts and pearl clutching by those opposing him. Something that also occurred when Barack Obama was elected in late 2008. 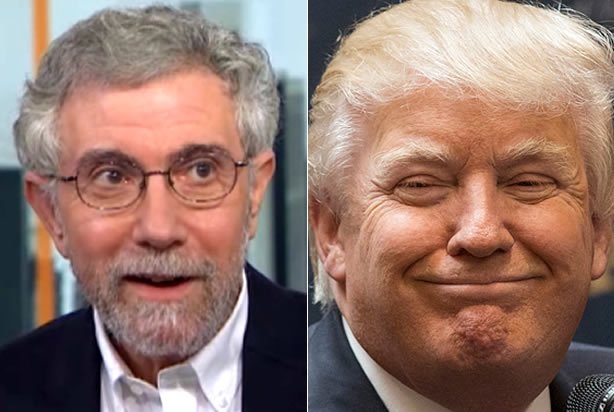 To highlight the phenomenon of ‘searching for’ or ‘catering to’ negative Trump stories, the more left leaning MSNBC cable network posted a 50% increase in total viewers during 2017 as they almost wholly focused on Trump, his administration and any calamities or scandals that would titillate those desperate to hear about them. Again, a strategy that worked to boost the viewership of the right leaning Fox News after the election of Barack Obama.

In Trump’s case though, the media interest was almost unprecedented, possibly due to his fame, his behaviour or just because he seemed an anomaly in the political environment. Keenly aware, Trump and the Republican Party obviously wanted to capitalise on the failed forecasts of doom and with their 2017 Fake News Awards.

At number 1 was prominent economist Paul Krugman who, during the immediate downward market plunge in reaction to Trump’s election, said: “It really does look like ‘President Donald Trump’ and markets are plunging… If the question is when markets will recover, a first-pass answer is never.”

Krugman also predicted Trump’s election would bring about “a global recession with no end in sight.”

Krugman is a Nobel Prize Winner in economics and a columnist at the New York Times. His reach is far and wide, so these statements were incredibly irresponsible. In the aftermath of an unrelenting run on US and global equity markets Krugman has now suggested Trump can’t take any credit. This is something that we’re happy to partially agree with, as there was a recovery well underway and investors should always be prepared to look past politics when investing. However, the Trump tax cuts did add fuel to the equity fire.

Yet Krugman was happy to pin an equity market crash upon Trump ahead of time. And if Krugman wants to play that game, Trump’s either responsible or he’s not. He can’t only be responsible for any potential downside. This highlights how irrational things become when partisan politics intersects with financial market returns.

Who knows how many on Krugman’s side of the political spectrum he led astray because they let his forecasts hijack their investment process. Not that this is restricted to one side of politics, there were many who believed the only way to survive the Obama years was through collecting gold and canned food.

During Obama’s term, gold’s returns were dwarfed by US equity returns, while that canned food is now out of date.

In other words, set aside the politics when it comes to money.