Global economic data proved resilient during Q2 though it was offset by renewed geopolitical tensions. Equity markets were volatile, but mostly positive, while the potential for a trade war between the US and China turned into a reality, while the Trump administration withdrawing from the Iran nuclear accord contributed to higher energy prices.

In the US, consumer confidence remained strong with retail sales data suggesting a consumption rebound after a softer Q1. The unemployment rate also reached an 18-year low of 3.8%, accompanied by robust wage growth. The Federal Reserve raised the target rate for Fed Funds by 0.25% and marginally increased its 2018 forecasts for growth and inflation.

The positive US economic data was balanced by moves from the Trump administration to impose tariffs on Chinese imports and withdraw from the Iran nuclear accord. In combination, these steps amounted to a more combative trade posture from the US, driving oil prices higher, and weighing on longer-term growth expectations. 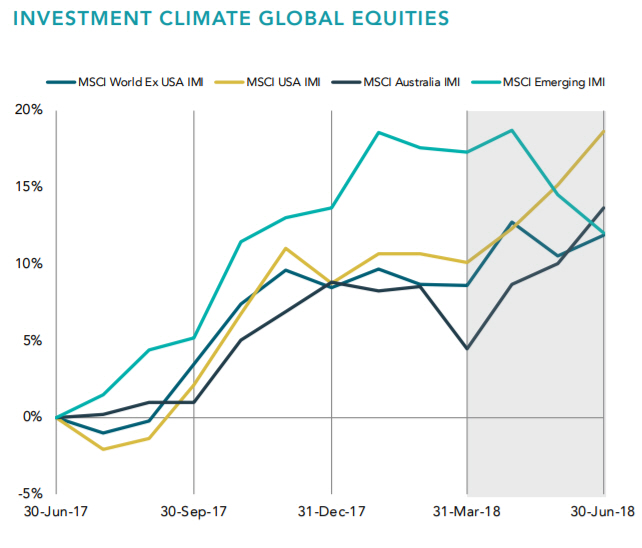 In the eurozone the quarter was marked by the return of political risk. Markets feared Italy may need fresh elections following an inconclusive outcome in March, with concerns this would become a referendum on Italy’s membership of the euro. However, a governing coalition was eventually formed between populist parties. Spain also saw a change of government, although this was largely greeted with calm, while German Chancellor Angela Merkel clashed with sister party the CSU over immigration.

Economic data from the eurozone pointed to steady growth but at a slower pace than last year. GDP growth for the first quarter was down to 0.4%. The European Central Bank (ECB) announced that it expects to end its quantitative easing programme in December 2018. The ECB added that interest rates will remain at current levels through the summer of 2019.

In the UK the Sterling performed poorly after the Bank of England backed away from a much-anticipated rate rise (in contrast to an increasingly hawkish US Fed). This followed with a flow of disappointing macroeconomic data, which culminated in the Bank reducing its 2018 growth forecasts – it is now expecting the UK economy to expand by 1.4% this year, versus 1.8% previously.

In Japan, economic indicators pointed towards a recovery from the GDP decline seen in the first quarter. Data released at the end of June provided some positive surprises with industrial production and inflation data for Tokyo both ahead of expectations. The strength of the labour market is nothing new, but a decline in Japanese unemployment to 2.2% was viewed as positive for inflationary expectations.

Asia ex Japan saw positive developments with regards to peace on the Korean peninsula. An Inter-Korea Summit saw leaders from the South and North pledge to agree a formal end to the war between the two sides. US President Trump subsequently met with North Korean leader Kim Jong-un in Singapore in June. In China, the central bank cut the reserve ratio requirement for banks by a total of 1.25% over the quarter to encourage lending and support growth

In Australia, the Reserve Bank continued to hold the cash rate at 1.5% as macroprudential policy and the spectre of the banking Royal Commission continued to influence mortgage lending and real estate market.

The Bloomberg Commodities index posted a slightly positive return in Q2. Crude oil prices continued to rally, with President Trump’s decision to withdraw the US from the Iran nuclear accord, despite OPEC announcing plans to boost supply. The industrial metals index registered a small gain. Nickel (+11.9%) and aluminium (+8.4%) were firmly up while zinc (-11.5%) and iron ore (-1.7%) lost value.

The following outlines the returns across the various asset classes to 30th June 2018.

Global equities made gains in a volatile quarter, as resilient economic and earnings data vied with an unsettling geopolitical backdrop to establish the market’s direction. Bond markets struggled despite risk aversion escalating late in the quarter.

While Japan eeked out a 1.1% gain for the quarter the rest of Asia was firmly down in Q2 with global trade concerns serving to increase risk aversion. The MSCI Asia ex Japan Index generated a negative return and underperformed the MSCI World. 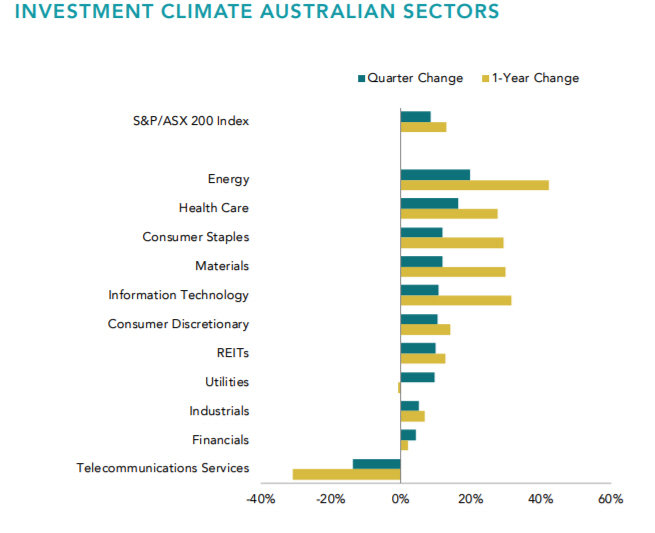 Emerging market equities recorded a sharp fall in Q2 with US dollar strength a significant headwind. Escalation in global trade tensions also contributed to risk aversion as US-China trade talks failed to deliver a sustainable agreement. Meanwhile the US moved to extend steel and aluminium tariffs to the EU, Canada and Mexico, resulting in the announcement of retaliatory measures. The MSCI Emerging Markets Index recorded a negative return and underperformed the MSCI World.

With thanks to Schroders & DFA Australia