GDP growth forecasts were revised down for 2019, with inflation projections also adjusted downwards. Warnings from several notable firms – most significantly from Apple – also fanned fears that earnings growth may slow. 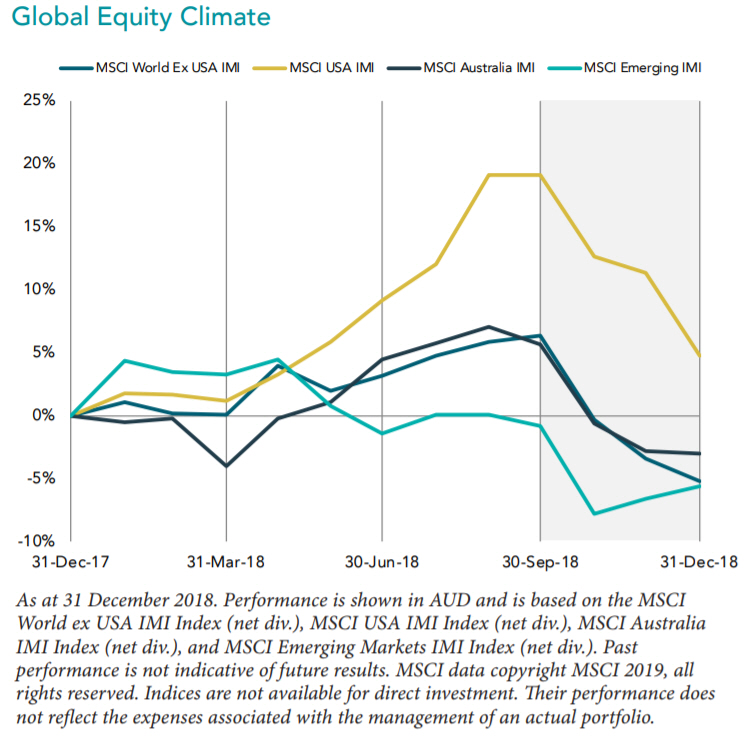 In the Eurozone, data pointed to slowing momentum in the EU economy. The flash composite purchasing managers’ index for December showed business activity slowed to the weakest level in over four years. The index came in at 51.3, down from 52.7 in November.

The “gilets jaunes” protests in France and weak demand for new cars were factors weighing on activity. As expected, the European Central Bank confirmed the end of its bond-buying program in December and reiterated that interest rates would remain on hold “at least through the summer of 2019”.

In the UK, despite the uncertainty, and the risk of a recession in the event of a “no deal” Brexit, the economy continued to recover from the very poor start to 2018. UK Q3 GDP growth came in at 0.6% quarter-on-quarter as expected, up from 0.4% in Q2 and the fastest pace since Q4 2016.

More recent data, however, has been volatile: UK retail sales disappointed in October, falling -0.5% month-on-month, but bounced back very sharply in November, increasing by 1.4% month-on-month, which was significantly above consensus expectations. UK households enjoyed an acceleration in wage growth and lower inflation over the period.

In Japan, little changed during the quarter. The Bank of Japan’s regular policy committee meetings resulted in no change to monetary policy, as expected. Economic news was somewhat mixed, but all the data needs to be viewed in the context of a succession of natural disasters in Japan which caused some slowdown in activity followed by a relatively strong rebound in subsequent months.

In December, the Reserve Bank of Australia (RBA) once again held the official cash rate at 1.5%, extending Australia’s longest ever stretch without a rate move to 28 months. RBA Governor Philip Lowe noted that global economic expansion was continuing, but there were ‘some signs of a slowdown in global trade, partly stemming from ongoing trade tensions.’

Even with continued low rates, there was no sign of an end to the property price falls in some mainland capitals, with Sydney recording the biggest annual decline since May 1983, according to CoreLogic.

The following outlines the returns across the various asset classes to the 31th December 2018.

The December quarter did the majority of the damage in 2018, though over the full year returns were still positive in the majority of asset classes. Most balanced and diversified portfolios would have held their ground over the course of the year.

In the US equities declined materially in Q4 – with especially steep falls in December – due to fears over economic momentum and slower earnings growth. The US-China trade dispute also continued to hamper investor optimism. The large cap S&P 500 index outperformed the small & mid cap Russell 2500 index (-16.7%), but still declined by -13.5%.

Europe and the UK weren’t spared the December quarter damage, with both markets recording double digit falls over the period. It was the same story, worries over rising US interest rates, trade tariffs, slower Chinese growth and Brexit combined to form a difficult environment for risk assets like shares. The defensive sectors of communication services and utilities – often perceived as safe havens due to their stable earnings throughout the cycle – were the only sectors to register a positive return.

For the Australian market, the 3% fall for the year was its first decline since 2011, with again most of the damage done in the December quarter. In sector terms, financials, communication services and energy stocks were among the worst performers for the year in Australia and globally, while gains were made in healthcare, IT and real estate investment trusts (REITs).

Finally, emerging markets ended down around 5% for the year—although this followed a robust 27% gain in 2017

While 2018 was a rougher year for equity markets than we have seen in recent years, with volatility periods at the start and end of the year, a longer-term perspective shows the virtues of a patient approach. The chart below shows the growth of wealth from a dollar invested in a 50% growth, 50% defensive portfolio over the past 20 years. The past year is highlighted towards the end of the line.

While market volatility can create anxiety for some investors, the record shows that reacting emotionally and changing long-term investment strategies in response to immediate news and short-term declines can prove more harmful than helpful and to highlight this, 2019 has resumed with something of a market recovery.

As we’re in a new year, the media’s focus has turned to speculating about possible developments for the year ahead. Recently, we have seen many opinions about the possible outcome of trade tensions, Brexit, interest rate cycles, geopolitics and commodity prices.

While it is natural to have an opinion on any of these issues, it is worth remembering that all these views and expectations from market participants are already built into prices. The news that moves prices changes every day. And even if you could forecast events, you still need to anticipate how the market will react.

You might have more luck with tonight’s lotto numbers.

With material from DFA Australia.