James Cordier of optionsellers.com is the type of guy who you don’t really know who he is, or what he does, but he’s someone who provides those assured sounding quotes on the direction of markets on the business channels. As his website used to say, he’s been featured on (or in) CNBC, Fox Business, Bloomberg, The Wall Street Journal, Forbes, CNN Money & Barron’s, among others.

Cordier’s fame reached beyond the confines of the business channels this week, though he won’t be posting any of those articles up for prospective investors. His website is gone. Now just a baby blue page with some contact details.

His final message, this tearful video to his high net-worth clients who aren’t as high net as they used to be. Cordier’s strategy blew up their accounts and not only that, left them owing money.

Cordier was an option seller. We’ll let Bloomberg explain it.

An option gives someone the right, but not the obligation, to buy or sell a commodity or security within a predetermined time period. Options are said to be naked when they’re unhedged. If a market moves violently against a naked short options position, it raises the prospect of almost unlimited risk.

If that doesn’t make sense to you, don’t worry. There’s only one part of it you need to understand, the last few words – the prospect of unlimited risk. That’s what Cordier was doing. The naked version on natural gas, believing the price would go down

Instead of going down, the price spiked. His fund lacked the capital money to cover his bets, so the brokerage acting for it had to borrow to cover. Now Cordier has no money, no fund and he and his clients are facing a large liability. Instead of his own malfeasance, he claimed it was a ‘rogue wave’ that took him out.

Wherever he got the idea from that natural gas was going down, who knows, at best the direction of anything is 50/50, but here’s the natural gas price chart for the past decade. 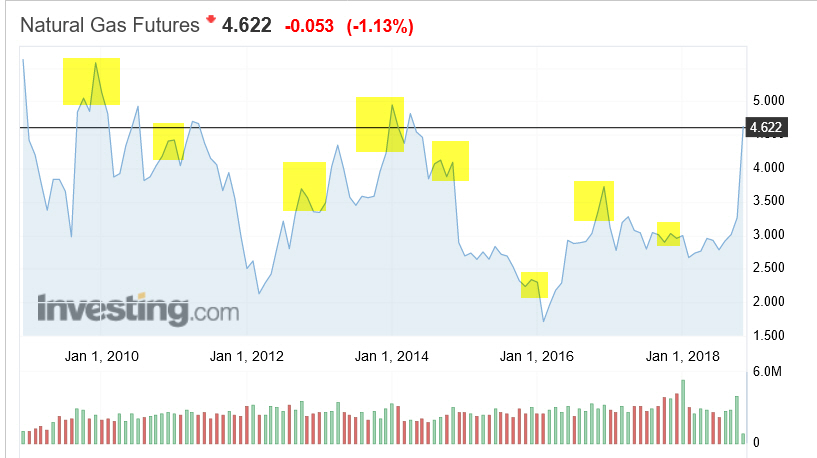 The highlighted areas mark the beginning of the colder months in the northern hemisphere. Colder temperatures usually mean increasing natural gas demand for heating. The moves upwards aren’t uniform, but there are generally slight upward movements around November. There can be a sell off when the realisation hits winter won’t be as harsh, but some upward moves have been quite violent. This latest spike isn’t without precedent, note the upward spike in late 2009/early 2010.

Cordier was a self-proclaimed guru in this method of gambling, he’d written books about it, and because he hadn’t blown himself up (yet) he was gifted regular appearances in the financial media. This is how easy it is to become one of those guys that say ‘this’ or ‘that’ is going to happen next. Switch over to the horse racing channel and there’s less certainty about who the winner of a race will be.

And certainty is the issue. All these investment managers are so certain about their strategy even when there’s minimal evidence behind them and the outcome is often a coin toss. They sell that certainty to lure investors and their money. Take this quote from his now defunct website:

James became convinced that Option Selling was a way to “level the playing field” for individual investors against fund managers and commercial players. Not only that, he slowly but surely became passionate in the belief that selling options could tilt the odds in favor of his clients

Cordier probably feels awful about this calamity and probably feels awful on behalf of his clients, who he called ‘family’ in his teary video. It’s all very touching, but let’s be honest, it’s not like families are absent idiot members who want to spruik their latest great investment that’s guaranteed to make them and you rich.

And while you can’t choose your family, you can choose your investment manager. Possibly the best lesson to take out of this. Pick one who can actually spell out an investment philosophy based on evidence. Not a gambling system that requires scanning the market constantly for ‘rogue waves’