It could be argued to regularly follow the media is to pursue the extremes of public discourse. Especially, when it comes to politics. Watching the TV, it can be frightening to think of some of the crazed minds that turn up to various ‘pro this’ and ‘anti that’ rallies, but remember they’re not actually representative of anything more than themselves.

The media focuses on these varying extremities because it’s good for their business model. Heightened political tensions and outlandish statements offer the impression that conflict, action and urgency are heightened. It turns heads. However, the news never leads with the millions who go about their daily lives and get through the day without so much as stubbing their big toe.

So, when consuming media, we need to keep in perspective that the benign and the beige aren’t likely to be represented.

Bringing us to Donald Trump. We’re a year in and if you hadn’t noticed – we’re all still alive! Defying many partisan predictions of apocalyptic doom. Similarly, we made it through the Obama years without our wealth being confiscated before we were all conscripted into globalised communist work camps.

Partisan political messengers are always trying to stoke fear and one of the biggest fears is financial pain. Trump critics were telling anyone who’d listen, before and after he was elected, that he would spell doom for the sharemarket. In the US, Newsweek’s Kurt Eichenwald was one who fervently pushed the idea. Tweeting the following to his over 400k followers.

First, he was urging everyone to protect their kids’ education funds. 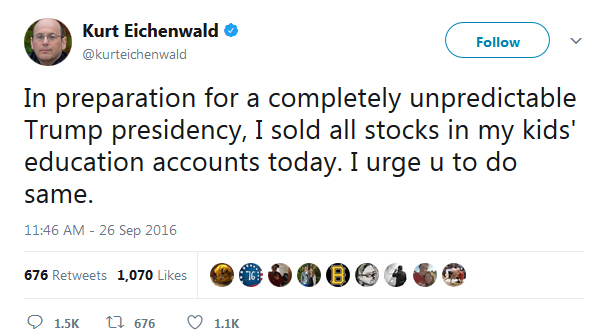 Then hours into the count on election day, he announced his whole portfolio went to cash a few months back. 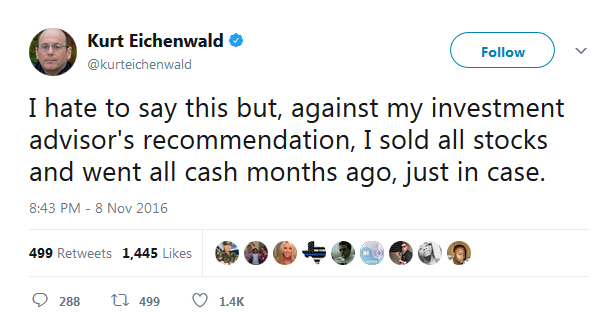 Only Eichenwald and his adviser know if this is a fact or just rank opportunism on election night by someone expecting a plunge the next day. As the end of 2017 neared, people wanted to know how Eichenwald felt about missing out on a 21%+ gain. In response he conveniently now claimed he had not switched to all cash, as he previously noted. He had miraculously chosen to invest in international shares instead, specifically investing in three indices that just happened to outperform the US markets.

If you find this explanation wholly preposterous, you’re not the only one. If he was shifting to international shares, it may have been more believable if he’d said so at the time. This is specifically why you should never base investment decisions on what is said in the media, especially if it is influenced by partisan politics.

Eichenwald has a track record of working for respected publications, he’s written books, including one on the Enron fraud, and regularly features as a talking head on US news networks. To the uninitiated he may look like he knows what he’s talking about. In reality, he was pushing a vision of the future those opposed to Donald Trump wanted to hear.

More than ever pundits and news organisations are catering to audience bias. Favourites are which side will ruin the economy, crash the stock market, crash the housing market, destroy your retirement or conversely who can make it all better. Never base investment decisions on any of it.

There will always be political risk. It’s just never as significant as you think.