It is a week out from the US Presidential election.

We’ve deliberately avoided the election until the very last moment. Why? Its lack of importance. We hear ‘this is the most important election of our lifetime’ almost every election. On some issues, maybe it is. When it comes to investing, it rarely is. Nor should an election ever be regarded as something to focus on.

If an investor is perpetually scanning the horizon for the next event, then they are perpetually distracted by things they can’t control. It isn’t conducive to disciplined investing. Agonising and handwringing over this election, or any other election, is pointless. Like a kidney stone, there is the possibility of short-term pain, but it will pass. There will be another one in four years’ time. The election, that is.

Capitalism will continue to function. Companies still want to make money. They will adapt to whoever is in power and whatever the policies are. Investors will continue to be rewarded over the long term for supplying their capital. This is why any time you see a chart or table showing investment returns during various periods of government, there is no discernible better party or leader. Economies and markets generally get on with it.

A suggestion to the contrary is full of bunk.

Market talk around outcomes revolves around the various sides wanting some validation for their guy or team. We know what history says: no clear better party. And we don’t know what the future is, so forecasting a market response is foolish. Both sides have negatives and positives. Their election or re-election will send money scuttling around to favoured industries. Some sectors will prosper more than others.

Biden rolling back Trump tax cuts on corporations won’t be great. Neither will treating capital gains and dividends as regular income. Increase the marginal rate on people earning over $400,000. There are policies and there is expediency. An economic recovery will need to be well underway before any big changes. Most importantly, a Democratic win will likely bring another massive stimulus package.

Trump equals tax cuts ongoing, China-bashing and deregulation. Likely winners (or those getting a hand) will be oil & gas, financials and defence. Infrastructure and clean energy will do better under Biden. Biden might look at a lock down to eradicate the virus. Financially painful. Trump’s plan won’t change. Letting it rip while bragging he beat it. More casualties.

Last time, prominent media personalities and even economic laureates were prognosticating about the end of days because of Donald Trump. Market ruin and economic armageddon. Neither occurred. Now Trump and his supporters use the same lines on Joe Biden. See how this works?

Either result should be considered business as usual.

The key word is ‘result’. The pandemic has done considerable damage meaning more stimulus will come. Financial markets will appreciate this. The current argy bargy over a current stimulus bill passing highlights what markets don’t like: nonsense and delay.

This prompts the key concern about this election. The concern is not a victory or loss for Biden or Trump, but a flap about the outcome. There is only one outcome an investor should want to see: the loser quickly conceding before making a swift exit into the sunset with the wind at their back.

President Trump has been making noise about voting fraud and ‘will he’ or ‘won’t he’ accept the result? What financial markets do not want to see is Trump putting on a tantrum about the outcome. If there is a very clear winner on the night, there will likely be a relief rally.

Going off the only real evidence we have, 2000’s Bush vs. Gore fiasco. The market does not like a contested election. 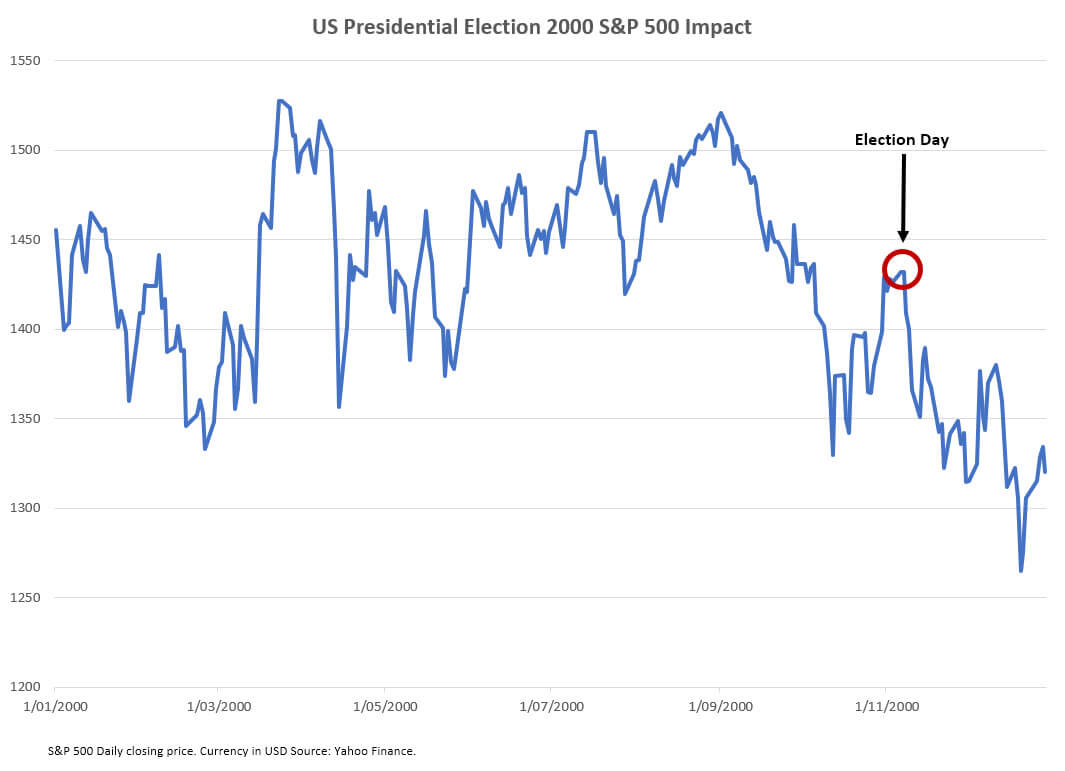 2000 was not the greatest year on the S&P 500. Calendar year, until election day on November 7, it was down 1.65%. It may even have been poised to finish the year on a positive note. With the state of Florida undecided on election night, that thought went out the window.

What followed was 36 days of turmoil as the election result hung on Florida. As the result was so close, it prompted a recount. The recount was a stop/start affair as courts at every level were involved in an attempt to determine voter intent on ballots. Eventually it ended in the Supreme Court. The recount was halted.

There was a minor rally in December after the chaos was sorted, but not enough to erase the losses. While this was all painful for US investors, back in Australia investors with diversified portfolios sailed through and our market actually held up through the chaos. The ASX returned 1.12% for November and 3.68% for the year.

No matter who you want to win, the best result is an unambiguous outcome.