House Prices to Fall 30% (Now We Have Your Attention…)

If you haven’t heard, house prices in Australia’s largest cities have been falling. In Sydney and Melbourne, auction clearance rates are wallowing in the low 40% range (it may even be lower given the transparency of the data) and the price decline in Sydney has extended out to 15 months without any signs of a turn around. Measured against other downturns, it’s not yet remarkable. 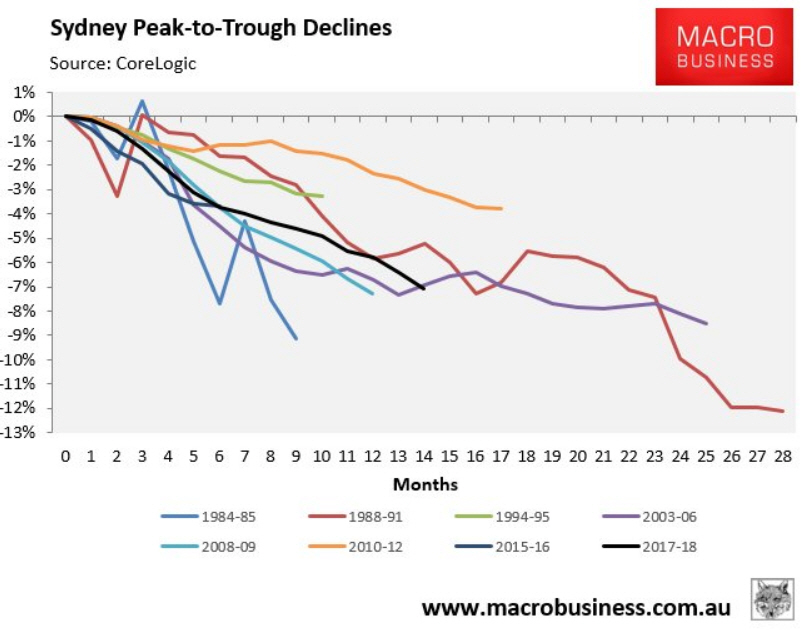 The falls have fuelled a furious guessing game from various real estate industry pundits. Their previous calls of where the markets would go in Sydney and Melbourne have been skittled and are now being continually revised as more negative data emerges.

The good thing now, the predictions have become a little more nuanced over the years. And the forecasters don’t just make one prediction, they now make multiple predictions with various scenarios. A good way to cover their backside in the future from people who want to drag up their old and failed predictions for a few laughs.

Only thing is the media doesn’t want to play that game. Martin North, of Digital Finance Analytics, was caught up in this back in September when he appeared on 60 Minutes talking about the potential for a 40% house price crash.

A similar deal played out this week when Jonathon Mott of UBS rolled out his five scenarios for Australian housing. They ranged from ‘we’ve already seen the worst’ to falls greater than 30%. Which one do you think took out the headlines?

North and Mott have regularly been down on housing, but it’s interesting to watch others in the business, who’ve always downplayed any chance of serious falls, begin to change their tune. From some, there seems a little bit of desperation. Moaning in the Australian Financial Review or the business section of The Australian that things are looking bad and could get out of control.

They aren’t writing for the average reader, they’re making direct pleas to regulators that they need to act in some way to stabilise the market. Who knows, it may stabilise itself, but a cynic would note there were no calls for intervention to take the heat out of the market as Sydney & Melbourne prices went wild until mid-2017. The same people also denied loose lending was a problem and there was no way it could be fueling the price increases.

Despite those claims, it’s widely acknowledged the falls are linked to the tightening up of lending standards by the banks. No more loose lending! Borrowers are having to open up their smalls drawer for inspection and account for every cent. And it’s being led by APRA, who were proven to be asleep at the wheel as the RBA dropped the cash rate. Who knew that cheap money needed a little bit of oversight? Surely there were some clues about what was going on as house prices swelled while wage growth was flat and household debt continued to climb.

At least once or twice a year this decade, we’ve noted Australia’s quite large debt to household income. It’s continued to grow and as interest rates fell, Australians have seemingly snorfled down more and more debt. It’s not the worst thing that the regulators pulled on the reins before the stagecoach hit something unexpected.

A few things to remember. Responsible lending isn’t a bad thing.  All real estate is local. There are other housing markets in Australia and some of them are doing fine.  As far as equity markets, maybe the banks won’t be generating cash like they used to, but it’s a big world and that’s why all portfolios should be globally diversified.

What should be pause for thought is how quickly substantial amounts of equity can be eroded when buying in an expensive market. Impulsive behaviour, like skipping inspections, was high at the end at the end of the boom in Sydney. Suggesting buyers thought the market would only go one way. Real estate has never been ‘no risk’ despite the claimed stability of bricks and mortar.

We don’t have any predictions. Only some thoughts: buy what’s affordable, using due diligence with a long-term outlook.