An Investor Who Knows Too Much?

Turns out he’s deliberately ignored the news since 8 November 2016 – the day Donald Trump was elected president. As you might imagine, Mr Hagerman is from the left or progressive side of politics and this is a personal response or silent protest against the election of Donald Trump.

While Mr Hagerman’s story has attracted ridicule from Donald Trump supporters, it’s those on his own political side who’ve heaped on the most scorn. The overriding theme being he’s an out of touch fool with no sense of social responsibility.

Yet Mr Hagerman might be on to something. With news constantly available and no more than a swipe away, too much time can be spent agonising over the latest political or financial titbit that we have absolutely no control over.

Does the latest Trump Whitehouse hiring or firing really matter or affect our daily lives? Does the latest market moving Trump tweet really matter? Especially if the inevitable next day clarification by Trump, or a member of his administration, returns markets to their previous place.

Not that it’s just a news blackout, this point in the story notes how he deals with his finances.

As for money, a financial adviser in San Francisco manages his investments. Mr. Hagerman says he throws away the quarterly updates without reviewing them.

No doubt his financial adviser appreciates his client’s lack of interest in the short term returns, but interest or lack of interest, the outcome is the same. Things don’t change just because they’re given more attention. With an investment portfolio in place someone’s future financial destination will always be the same, whether they check that portfolio monthly or every second year.

Looking back on a financial journey, that becomes even more obvious, as the following chart shows. 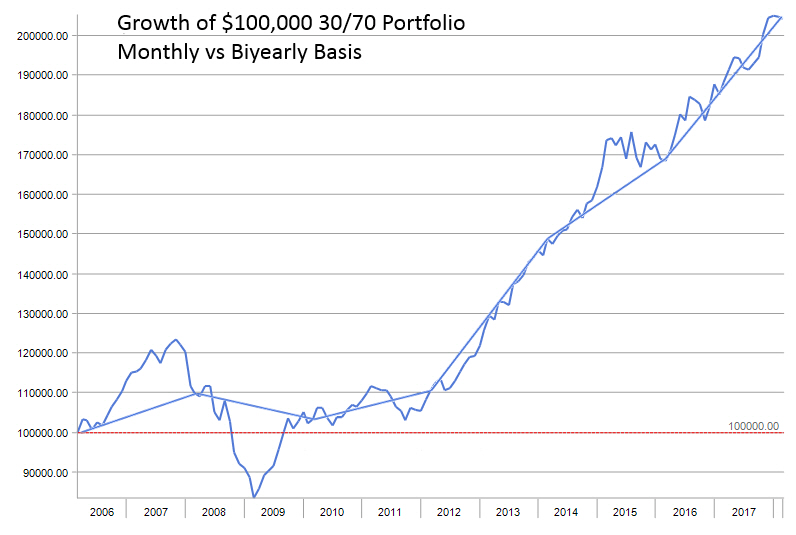 Had you invested $100,000 into a 30/70 portfolio (30% cash, bonds/70% equities, listed real estate) in March 2006 it would have grown to $204,149 by February 2018. How you felt about your portfolio, investing in general (and your adviser) throughout that timeframe, may have varied though – depending on how often you checked your balance.

The chart shows monthly movements (jagged line) vs biyearly movements (smooth line) in the same portfolio. Imagine both intervals as check-in points by the portfolio owner. The monthly check-in suffers many falls along the journey, while the biyearly check-in is decidedly free of turbulence.

The month on month check-ins reveal a portfolio consistently in the red during 2008/09, when the financial crisis was in full swing. The biyearly wasn’t checked again until 2010, when it was back in positive territory – so nothing to worry about, right?

The message? The happenings of those 12 years are largely irrelevant. No matter how many things the media told us to worry about, or what information we filled our heads with, it wouldn’t have changed the outcome. The end result for this portfolio would always be the same.

Agonising over the minutia? Pointless. We’ve got lives to lead. Take it from our subject.

“I had been paying attention to the news for decades,” Mr. Hagerman said. “And I never did anything with it.”