It’s the decade ahead 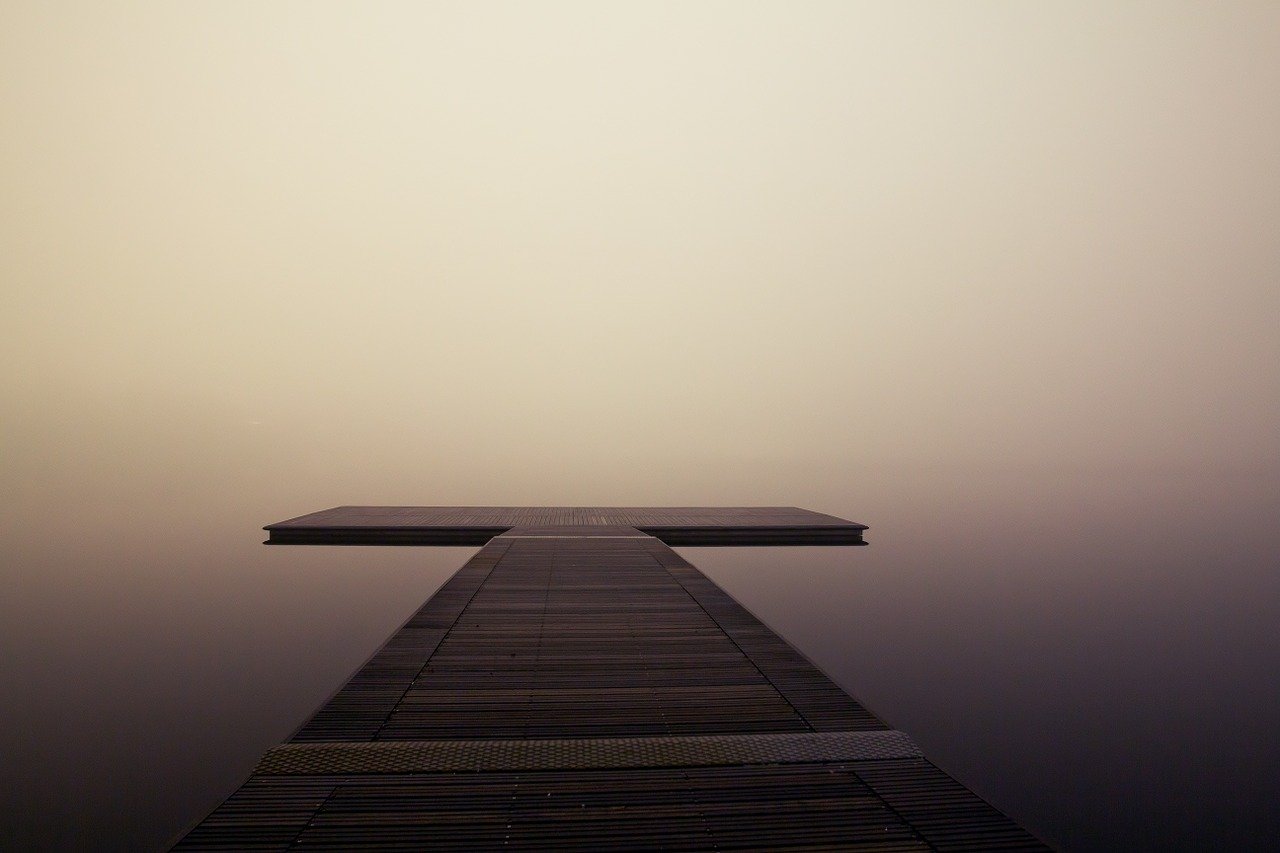 It’s that time of year. When everyone starts talking about what will happen next year. Banks. Brokers. Economists. Lunatic gold newsletter salesmen on Youtube. They’ve all got an opinion. The media goes on holidays while those left manning the fort get extra lazy. We’re all subjected to unfiltered astrology calls on financial markets. It’s termed businessman’s pornography with good reason.

The turn of this year into next is more heightened than most. It’s also a new decade. If you think forecasting a year ahead is an unreliable and impossible task, imagine extending such brazenness out to ten years. Then imagine publicly putting your name to such stuff. Many do, safe in the knowledge few will ever remember.

Some will want to get clever. Those running investment funds where a belief in stocking picking and forecasting is the way to riches (mostly theirs) will proclaim there will be sectors to avoid. You’ll need to be selective they say. Translated: you’ll need them to be selective for you.

Others will offer a pro forma response. They’ll average out market returns for the past ten, twenty, thirty, fifty, one hundred years. Arguably you can’t do much wrong if you don’t stray from averages of the past. Several well-known bank economists quote almost the same expected return every year. Might as well hug history. Looking back can be instructive, so let’s look back.

The 1980’s had an ominous call for investors to shake off. This decade started a few months after one of the most famous magazine covers in investment history. Businessweek’s ‘The Death of Equities’ published in August 1979. 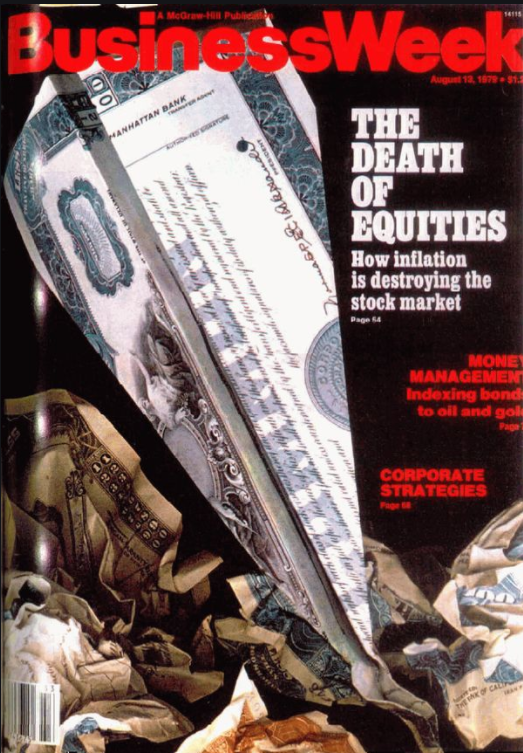 It referred to the US, but mostly related to the inflation issue of the day. Something prevalent in most economies at the time. From an Australian perspective, the proclaimed death was a fizzer for the first 18 months as the ASX went up 50%. An abrupt reversal took it almost back to where it started. Not great while inflation is running at double digits. By the beginning of 1983 the defibrillator was out and the patient was resuscitated. One of the greatest bull markets runs in history followed. Until October 1987. Ten grand was turned into 54 thousand. Then a quarter of it was lost in a day.

We always say expect volatility, but the 1980’s required your heart medicine nearby. If you rode the decade out, the average annual return on the ASX was an astonishing 17.68%. $10,000 left alone became $50,915 by 31 December 1989. The ‘Death of Equities’ it wasn’t. Finally, 34% of months delivered a negative return. No one invests per calendar month but keep a note of that figure.

The 1990’s had an even more ominous call to deal with than the death of equities. In 1987 economist Ravi Batra entered the New York Times bestseller list with a book titled ‘The Great Depression of 1990’. Originally published in 1985 under the title ‘Regular Cycles of Money, Inflation, Regulation and Depressions’, it’s obvious why the first print run didn’t capture anyone’s imagination.

No great depression, but recession did bite in the early 90’s across the West. This meant the 90’s had a similar start to the 80’s. Sharemarket investors spent the first three years of the decade stuck in the mud. After that it was off to the races again. The average annual return for the decade was 10.77%. $10,000 left alone became $27,811, while 36% of months delivered a negative return.

Adherents of Batra’s book can still be found howling “he only got the date wrong”. That speaks for itself. We’re still waiting.

The 2000’s proved sometimes the nonsense calls aren’t all doom and gloom. To coincide with the new century, investment strategist Charles Kadlec released ‘Dow 100,000: Fact or Fiction’. His conclusion was the US Dow Jones Index would reach 100,000 points by 2020. It’s currently 71,000 points short.

The US was a wasteland for returns in the 2000’s. Terrorism. War. Various investment bubbles exploding. In Australia, if you take the decade as a whole, you wouldn’t complain. An average annual return of 8.69%. $10,000 left alone became $23,017 and 34% of months were negative. The elephant in the room? A massive run upwards from the mining boom followed by a massive decline thanks to the financial crisis.

Finally, our current decade. Memories of 2008 hung around. Several pundits used that fear to perpetually wind up about the next disaster. 2008 was just the entrée they said. Not so. The 2010’s never reached the great heights of the previous decades. Nor did it offer as many painful moments. Until this point the ASX has delivered a 7.88% average annual return. $10,000 left alone became $21,074, with 35% of months in the negative. 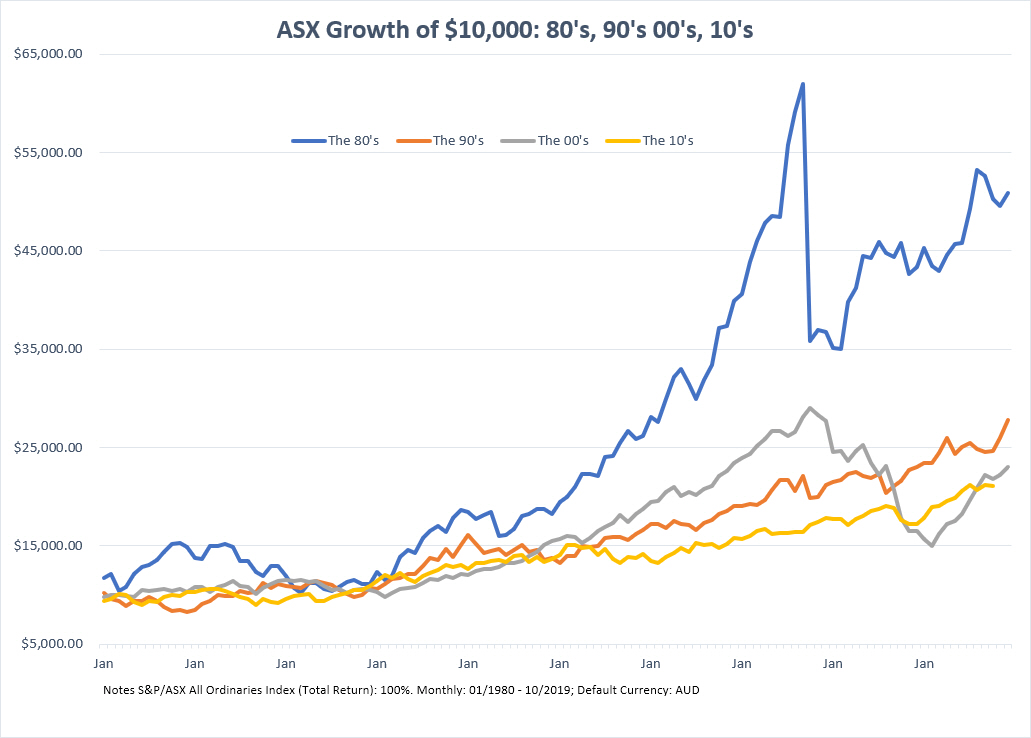 What can we learn from this? It’s a small sample size, sliced into arbitrary time frames. Mostly it’s a history lesson. Four decades is a long time in anyone’s lifetime. There are always arguments to abandon financial markets, but the alternatives are never convincing.

The are no guarantees. The ride will likely be rough, but combine this market with others globally, include a couple of other asset classes, and an investor gives themselves the best chance to increase their wealth in the decade ahead.