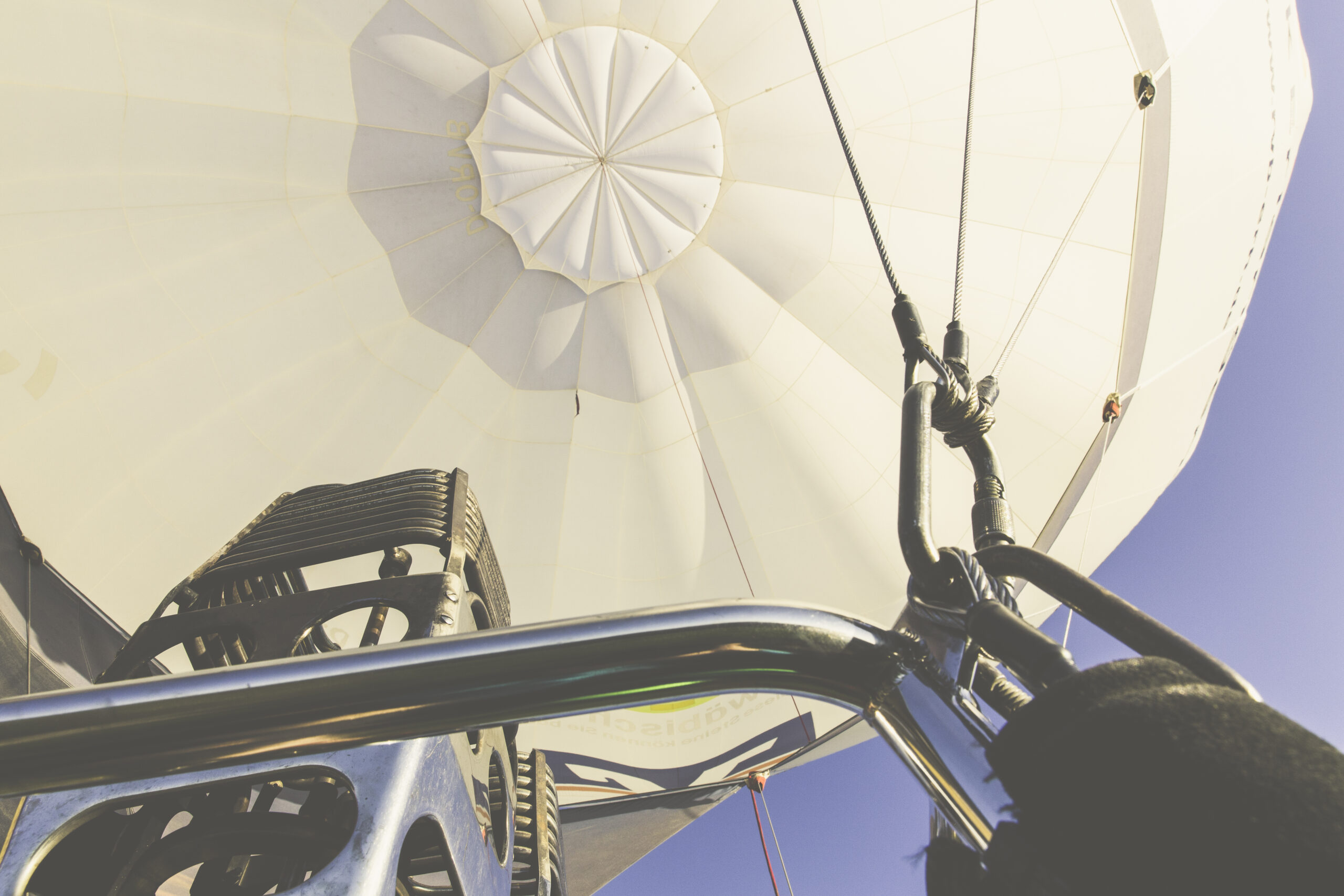 Toward the end of October, Australia’s bond market received a surprise. For most of the first half of the year the Reserve Bank of Australia had been buying up 3 year dated bonds in an attempt to suppress yields and keep them around the 0.1% level. If bond prices are bid up, the yields fall and vice versa.

This had been successful until June, when the RBA suddenly started pulling back from the market and the 3-year yields, which play a role in fixed mortgage rates, moved sharply from the 0.1% to 0.4%. Yields again trended downward until September when they began moving up again as doubts emerged that inflation was going to remain subdued.

Then at the end of October inflation figures came in hotter than expected and yields doubled in a day. One day later the RBA elected not to buy any 3-year bonds at all. Its target of 0.1% was blown away as yields spiked past 1%. Many people took this to mean interest rates would be moving upward soon, and one of them was treasurer Josh Frydenberg. He raced to the media late on a Friday after bond yields spiked and told everyone “not to panic about inflation” but his behaviour suggested he was certainly panicking.

At its latest meeting in early November, the RBA officially announced what it signalled in the bond market the week prior. It wouldn’t be defending yield targets any longer. With all this going on it seemed like interest rates would be going up, but RBA Governor Phil Lowe continues to suggest there will be no rate rises in the near future. As recently as this week he ruled out 2022, and again placed an emphasis on 2024.

With this chaos and a continuing tug of war between “will they?” or  “won’t they?” it’s another reminder the best financial and investment strategy is one that doesn’t rely on chopping and changing according to market conditions or even needing to pay attention to this stuff in the first place. It’s a different story for those who are heavily indebted, but that again comes back to having a strategy that’s all weather and all purpose. If you loaded up on debt when interest rates are at historic lows, it might be a jittery existence as you listen to this noise in the years ahead.

The frustration with inflation is it’s basically a stealth tax. And while we keep hearing the word “transitory” that’s also a stealthy word. Quite often when prices increase, they don’t necessarily decrease again. They are baked in. That’s not transitory. Petrol/oil being the most notable exception where prices do decrease after an increase. Inflation may slow down, which is what is implied by transitory, but if your wages don’t keep up with those initial rises then you are going backwards.

Australia is sitting at record low rates with supposedly transitory inflation. One of the interesting questions to ask is there any precedent of long-term low inflation spiking before dying down again? Japan is well known for struggling over the past 30 years to increase inflation. A massive boom ended in the late 80’s and its population levelled off, before starting to decline. Japanese economic headwinds are now into their fourth decade.

Japan’s inflation rate trended down to negative in the mid 90’s and has averaged less than 0.2% annually ever since, albeit with an occasional spike upward. As shown on the chart by the circles, there are three times between 1990 and 2020 when Japanese inflation briefly moved above 2%.

The first temporary spike in inflation in the late 1990’s, was partially due to an increase in its sales tax from 3% to 5%. It didn’t do much for the economy as it fell into recession again soon after. Although Japan was also affected by the Asian financial crisis at the time and Japanese consumers were hoarding money, being hesitant to leave it with banks, so it’s hard to pin the following recession solely on the sales tax increase. There was also a minor move upward in oil prices, but they took a tumble soon after, falling to under $11 for West Texas Crude. Yes, $11 a barrel. 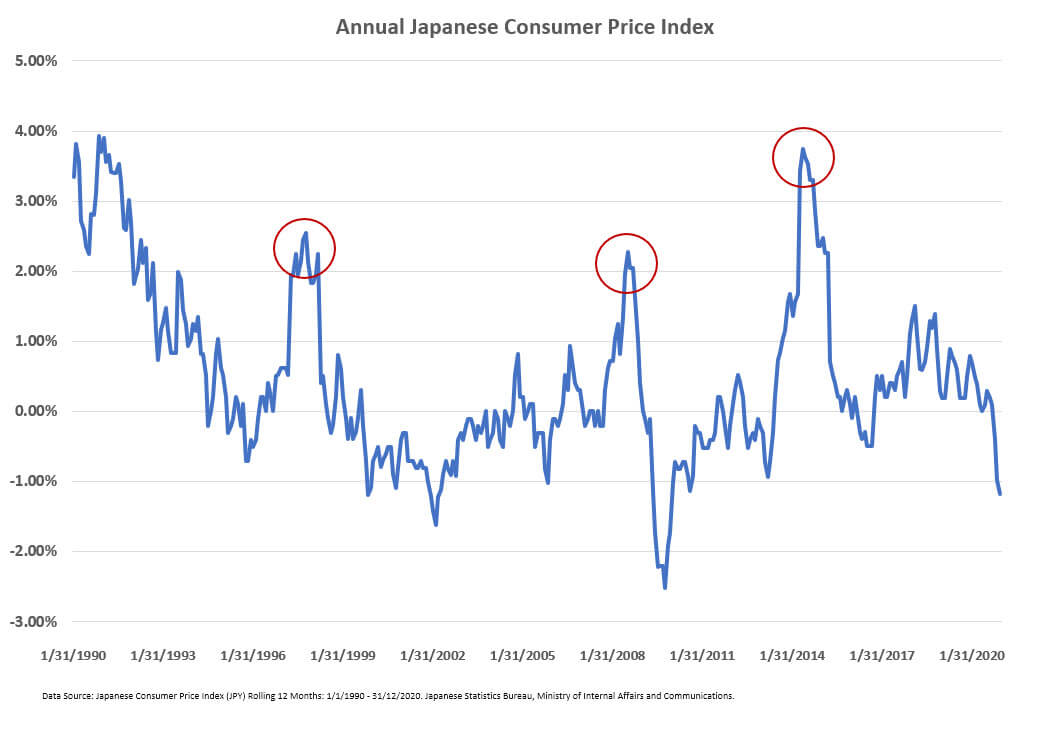 The second temporary spike in inflation was during the period of the global financial crisis of 2008. Those of us with good memories will remember it wasn’t all deflation during that period. West Texas crude prices hit an all-time high of $145 in July 2008, while food prices were also increasing at the time. As we know it didn’t last long because the financial crisis really accelerated in the second half of 2008 and oil prices fell to a low of $30 later that year.

The third temporary spike in inflation came in 2014. This was a combination of factors that played a role in the previous spikes. A sales tax increase from 5% to 8% which also prompted consumers to bring forward purchases, and another strong movement in the oil price which saw several periods above $100 a barrel, until a swift price collapse in late 2014. Oil prices and a weaker currency were key players in this inflation spike and decline. Japan had turned off its nuclear reactors after the Fukushima earthquake and tsunami, so it was more exposed to oil prices.

Oil prices played a role in each of these spikes and falls in inflation. While it’s foolish to make any forecasts about oil prices due to its volatility, US oil companies have been behaving in a more financially disciplined manner lately. This is in contrast to the previous decade where they burnt through borrowed capital to increase output in shale basins while ignoring profitability. If this discipline holds, it’s a cap on global supply and we can forget about petrol helping to ease inflation.

Are there any lessons here for Australia? The chart shows, despite the occasional spike, Japan has had trouble restarting its economy and generating inflation for a long time. And Japan’s problems are Japanese specific, so not greatly comparable to Australia, but Australia has its own specific set of problems that were becoming entrenched before the pandemic.

Wage growth has been sluggish in Australia for some time and always lower than RBA forecasts. Australia’s economy wasn’t exactly motoring before the pandemic, evidenced by inflation not in the RBA’s target followed by the continual cutting of interest rates. Maybe the pandemic is just a temporary blip before we resume our old ways?

We may know we’re paying more for everything, but the RBA doesn’t seem fussed. RBA Governor Phil Lowe is consistently referencing wage growth as the thing he wants to see moving before rates will go up. Meanwhile, the borders are about to open again, bringing with it more people. Competition for jobs isn’t generally good for wage growth.