Feeling a little too comfortable? Without a correction, the tired media headline of “X billions wiped off the sharemarket today” has been on hiatus so far this year. In its absence, there has been continued pontification about the overvaluation of shares, hinting about our closeness to a correction, and which of President Trump’s tweets might start any downfall.

In other words, if you don’t have any actual news to report, talk about the next best thing – the potential for something to happen.

This has been occurring throughout the media landscape, but The Australian Financial Review (AFR) is particularly good at setting the pace on the “potential” for something to happen. They started talking about a “pending correction” on January 11 this year.

By late January they cobbled together the thoughts of a few fund managers who wouldn’t reveal what they were actually doing, but assured readers “there would be a sharp market correction at some point”.

Early February and a correction in resource stocks was “looking increasingly likely”.

On February 22 they were again talking about the “potential for a correction” as they noted a “high level of uncertainty means it is now more important than ever to draw on expert opinion to guide investment decisions”.

The AFR seemed to forget that as no one has a crystal ball or a time machine, financial markets aren’t any more or less uncertain than they’ve been at any other time in history – uncertainty is the nature of the next second, minute, hour, day, week, month and year.

And which expert opinions did the AFR offer up? All short termers advising to watch the financial news, growth, inflation and GDP – just what every sane person wants to be doing with their spare time!

By early March, and with the correction nowhere in sight, the AFR hyped up the much-anticipated US Federal Reserve rate rise as the trigger. Three times in the lead up to the decision they referenced a rate rise as having the potential to kick off a correction. Yet when the rate rise came, world markets surged upward in response.

Is a correction coming this year? If history is any guide – yes. As our chart shows, they’ve visited us every year for the past 32, but they’re rarely something to be concerned about. Despite the average correction being 12% over the past 32 years, 75% of the time investors have enjoyed a positive return.

The smart investor accepts corrections will happen upfront and they get on with their life. The not so smart investor reads the AFR and speculates about the right time to be in and out of the market. 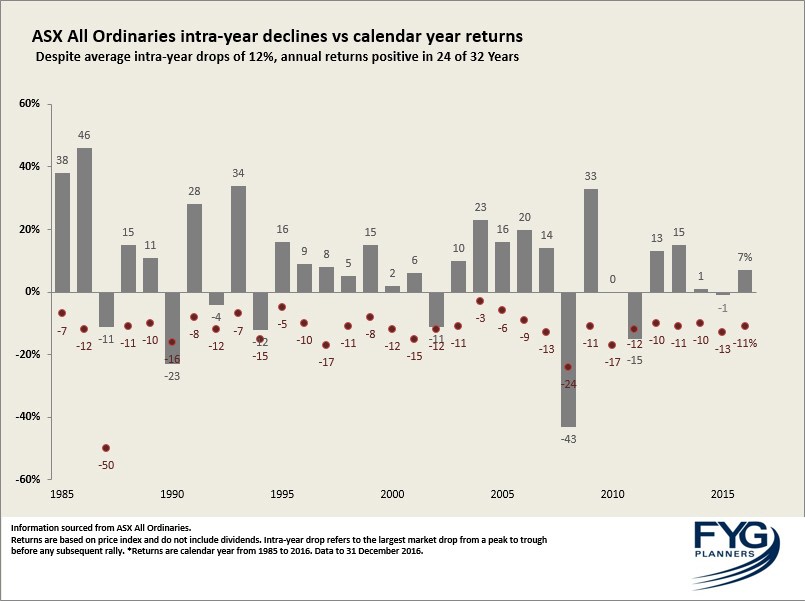 Inevitably they pick the wrong times. That means cheering down days as they seek confirmation that the next correction is starting, before wincing when the market turns green again. Given the high expectations for a correction so far in 2017, those trying to time its arrival have mostly been wincing.

This isn’t to discount a correction in 2017, but unlike birthdays and Christmas there’s no fixed date.