Shocks, naturally, are unwelcome and it can take some time for markets to rationally analyse and understand the impacts of particular geopolitical events. Take the Brexit vote for example. On the day the vote was announced (June 24) the Australian sharemarket fell 3 per cent while the broader global sharemarket index was down even further.

Three weeks later the Australian market was up 3 per cent and while the global market index did not recover as strongly it was at least back into positive territory. The initial surprise of the vote clearly unsettled markets because of the uncertainty it created.

This year markets had to also contend with the ebbs and flows of our federal election campaign – and a week or so of uncertainty over the result.

Now we are about a month out from when the United States votes for its next president. As the world’s largest economy and global superpower it is not surprising that the broader international community is following the presidential campaign with keen interest.

So what would it mean if Hillary Clinton or Donald Trump are the next residents of the White House?

The answer – based on Vanguard research that looked at decades of historical data – is that presidential elections typically don’t have a long-term effect on market performance.

“It’s understandable that investors might have concerns because of the different policy positions of the candidates and the strongly held views of voters of all political persuasions,” said Jonathan Lemco, Ph.D., a senior strategist in Vanguard Investment Strategy Group and former professor of political science at Johns Hopkins University.

Vanguard research going back to 1853 shows that stock market returns are virtually identical no matter which party controls the White House. 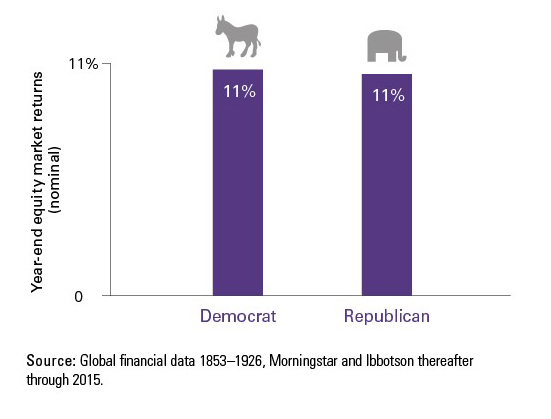 “Once you take into account volatility, the returns of the stock market under Democratic and Republican administrations are virtually indistinguishable,” Mr. Lemco said. “This is one more reason why investors should focus on more meaningful factors when it comes to their portfolios, such as diversification and controlling costs.”

Keep in mind that many factors influence market behavior. The most important is market valuations, but others include globalisation, technology, demographics, the Fed and the economy, and unforeseen events such as wars and natural disasters.

To illustrate this point, Mr. Lemco noted that while the S&P 500 experienced some of its strongest gains during the presidency of Gerald Ford, this was primarily because stocks were attractively valued following the bear market of the early 1970s that ended shortly after President Ford took office.

Because the 2016 campaign has been surprising for some, investors might worry that this adds even more uncertainty for the markets. Mr. Lemco cautioned that the current situation doesn’t necessarily mean higher volatility after the election.

“Despite the surprising nature of this election year, volatility hasn’t exceeded normal levels for a presidential election year and there’s no indication that it will deviate from typical patterns after the election,” he said.

What investors can do

Rather than react to the latest headlines about the 2016 election, Mr. Lemco said, investors should remain focused on the following enduring principles, which involves things they can control:

“The outcome of the election is meaningful because markets inevitably react and having some context for short-term market movements can help investors manage expectations,” he said. “But in the end, short-term developments are less important to our success than the big-picture trends that will shape markets in the years ahead.”

Written by Robin Bowerman, Head of Market Strategy and Communications at Vanguard.