Last year the independent senator from South Australia, Nick Xenophon raised a loopy idea that has long been an obsession of the real estate industry. Let first home buyers raid their superannuation to buy a house.

It didn’t grab a great deal of attention and it attracted mostly criticism. Given Xenophon enjoys an occasional populist thought bubble and lacks the ability to carry such a proposal through to legislation, it soon died off – until recently.

With the federal Liberal government struggling in the polls there have been some notable backflips and populist ideas emerging. Xenophon’s superannuation raid for homes was recently reheated by Treasurer Joe Hockey. Given Hockey’s position in the government it attracted significantly more attention and unfortunately somehow legitimised the idea as being worthy of debate.

A similar idea was introduced in Canada back in 1992. Called the Home Buyers Plan, it was suggested to the then Canadian government by the Canadian Real Estate Association during a real estate downturn! First home buyers in Canada are allowed to dip into their Registered Retirement Savings Plan (RRSP) up to $25,000 (increased from $20,000 in 2009) for a deposit on a first home.

The money is meant to be repaid to the RRSP over 15 years, but in 2011 and after $28 billion in withdrawals, the Canada Revenue Agency reported 47% of the people who borrowed the money had never paid back a cent.

Probably because they don’t have the money.

Looking at Canada’s housing market we might be able to understand why. According to the real estate boards of Vancouver and Toronto it now takes over $1 million to buy a house in either city. A situation even worse than Melbourne or Sydney. 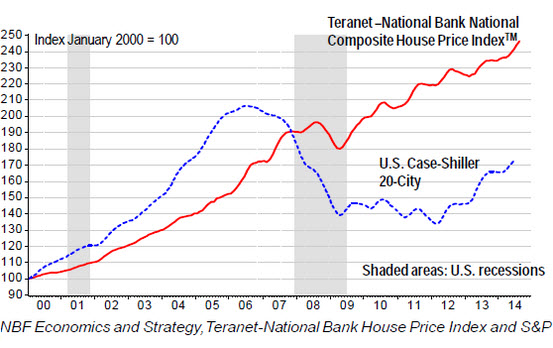 And as the graph above shows, Canadian national house prices (the red line) have continued to power upwards becoming more unaffordable since 2009 when the Home Buyers Plan withdrawal limit was increased. Meanwhile in the 3rd quarter of 2014 Statistics Canada announced Canadian household debt had reached an all-time high.

It seems ridiculous for governments to encourage raiding retirement savings to bid up home prices and further indebt ourselves, but let’s look at how it affects a retirement scenario.

Assume two 30 year olds with a 35 year superannuation timeframe. They both have $25,000 in their superannuation account and they’re both currently earning $50,000 per annum, meaning a $4750 yearly super contribution. Over 35 years we’ll assume continuing employment and an annual pay rise of 2%, compulsory employer contributions stay at 9.5% and they make no additional contributions.

Pandering to the current angst of first home buyers over rising house prices in some cities may be a popular move in some circles, but it appears extremely short sighted.

Firstly, it hurts the retirement incomes of those who raid their superannuation and may mean they’re drawing a government pension when they previously wouldn’t. Secondly, you never make anything more affordable by throwing money at it. Like with the first home owners’ grants, sellers will see first home buyers coming and adjust their prices upward accordingly.

After all, ask yourself why the program in Canada was suggested by the Canadian Real Estate Association during a market downturn and why it was increased during the financial crisis in 2009 – it certainly wasn’t to push prices down.