The Logical Sequence of Life

In the ongoing talkfest over housing affordability it’s clear the only affordability solutions ever given serious consideration by any government are the ones likely to push up house prices. These solutions either give more money to first home buyers or increase the amount of debt they can take on. Both seem like gifts to the inexperienced, but only serve to make housing more unaffordable by adding to demand.

For all the furrowed brows, the sombre looks and the public handwringing from policy makers, no-one is actually serious about fixing the problem because they all fear the potential fallout.

To make housing more affordable, houses have to become cheaper. Something that horrifies homeowners and investors and something politicians don’t want to be blamed for. With actual affordability solutions condemned forever, news has filtered out that the government is considering another ‘affordability solution’ and it involves first home buyers accessing their superannuation.

Kudos to the real estate industry because no matter how ill-considered the idea, they’ve long salivated at the prospect of superannuation funds flowing into real estate and they have lobbied relentlessly for it to happen.

Housing is the place where emotion smothers logic to death, which is why grabbing retirement funds for housing is such a bad idea. While we can live anywhere, but it’s almost impossible to make up for our most powerful investment contributions – the early ones. What is the most logical financial path we can take? If we were operating with Mr Spock like logic, our financial paths would travel like this:

People would first build an investment/retirement fund which would continue to grow throughout their lives. They would then buy a house. Finally, they would have children.

In reality, investing and retiring is often an afterthought. Buying a house is seen as an important goal and human biology suggests childbirth can’t be delayed too long. However, with childbirth now often coming later in life, what could this more logical sequence of events look like?

Assume a couple both aged 22 who are both earning $50,000 pa. They have no savings, but decide to start saving and investing $300 a week between them outside superannuation, they will increase this savings rate at 2% pa. Using a historically achievable return of 6% pa, in ten years their investment balance will be $223,002. If they never make another contribution, and don’t make any withdrawals, by the time they are 60 this portfolio will be worth $1,140,022. 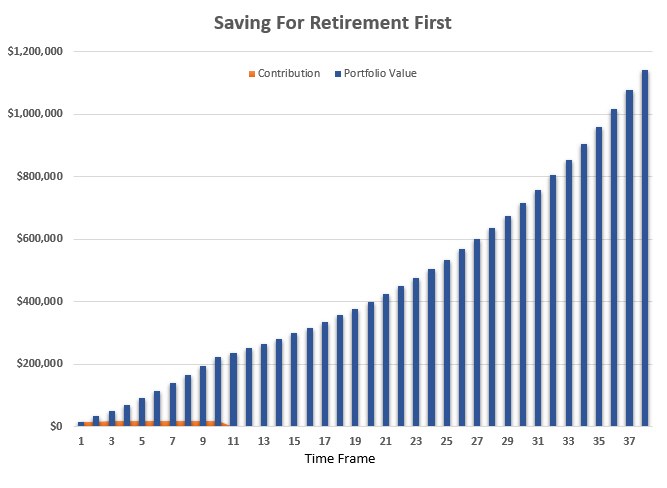 Their total contribution over that ten-year period was $171,815. After that ten-year period, and now only in their early thirties, they could divert their annual savings power over the next few years into a house deposit. Upon buying a house, previous rental commitments would become mortgage commitments, and if they were intending to have children their annual savings could then be diverted into that costly exercise!

Which is why it’s so illogical to start diverting retirement money into buying houses. Those early contributions are what can turbocharge a lifetime of investment growth.