The Motive Behind Financial Predictions

You may have noticed oil has been a consistent theme this year. Not because we’re predicting where it may go, or even have any interest in the price (beyond how it impacts us at the pump), but because the price fall lured plenty of financial forecasters out from under their rocks to tell us all where the price would be going next.

Given the oil market can move quite fast, we have the ability to monitor and highlight how those bold calls have fared and further highlight why someone telling you about the financial future is either clueless or (most likely) self-promoting.

One of the biggest calls on oil, and the one that grabbed the most attention, came in February from Bloomberg columnist Gary Shilling. In his column, “Get Ready for $10 Oil”, Shilling certainly made a good case that there would be so much oil flowing around the world that swimming pools would soon be used for storage.

Shilling found every negative piece of data that backed up his conclusion or low oil prices and cobbled together a scary story. And like most forecasters who are trying to convince us of what will happen next, he only gave us the side of the story that made his conclusion look inevitable. The price of oil has increased over 10% since Shilling made his call. Now Shilling may have genuinely believed oil was going low, but that’s truly uninteresting, to get attention he needed a headline making target price.

The thing about Gary Shilling is he’s not just a columnist for Bloomberg. That’s a sideline. He sells an online newsletter. He sells access to online webinars. He also runs an investment advisory and consulting service to institutional investors and companies.

When someone like Gary Shilling makes a big prediction as a Bloomberg columnist, the objective is to draw readers to Bloomberg’s website, but it’s also part advertisement for the rest of Shilling’s business ventures. And to back that up, Google showed a significant spike in searches for Gary Shilling in February 2015 after he made his $10 call on oil. 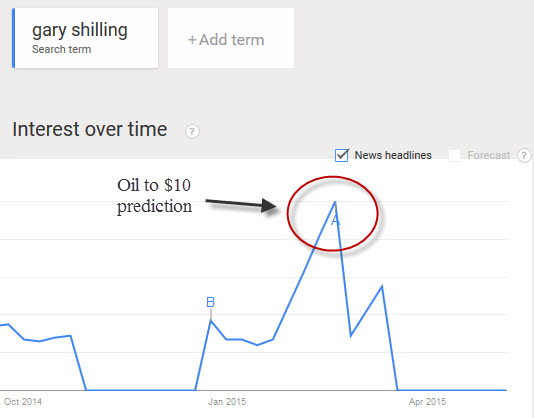 A public dud prediction may not seem great for potential business, but Shilling’s existing and potential clients would understand writing for the investment media is part marketing/part entertainment. And rarely does anyone in the media bring old predictions up for this reason. If columnists and pundits were often publicly embarrassed by their bad predictions they likely wouldn’t make predictions at all. Then no one would read or listen to them because they were no longer entertaining or controversial!

Then there’s Shilling’s online newsletter business. Many would consider his prediction ridiculous and dismiss it, but confirmation bias suggests there would be another group of people who’d be drawn to it. Their existing views line up with his prediction and they’re further looking to consume information that confirms their assumptions.

Meanwhile, the rest of us have to filter and make sense of this nonsense. Our advice is to be ahead of the game and forget making sense of it – just ignore it!